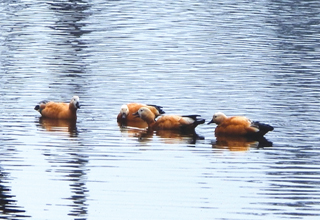 [ Dr KS Kanwal ]
Bird watching or avitourism is a form of nature-based ecotourism that mainly focuses on observing and identifying birds in their natural habitats. It is one of the fastest growing outdoor activities around the world and gaining popularity in developing countries.
Birdwatchers are mostly conservation-minded responsible eco-tourists, who have respect for wildlife and natural habitats.
According to a study, the annual economic value of bird-watching tourism industry in the United States is around $107 billion; and United Kingdom bird-watching expenditures are estimated at $500 million per year.
Arunachal Pradesh is recognized as one of the 25 mega biodiversity hotspots of the world with the second highest breeding bird diversity in the world. It is the largest hill state (83,743 kms) in the Northeastern region of the country, having an 80% forest cover and a considerable area (around 11.82 % of the geographical area of the state) under protected area network (PAN). There are two national parks, 11 wildlife sanctuaries, one orchid sanctuary, two tiger reserves, two elephant reserves, and one biosphere reserve.
The state is exceptionally rich in avian diversity. Around 750 birds species have been recorded from the state (57% of the total avian species of the country), making the state the second highest avian diversity state in the country.
There are 25 notified Important Bird Areas (IBA) in the state. Arunachal Pradesh is not fully explored in ornithological perspective and holds great potential for new bird species discoveries.
Some new bird species such as the Himalayan Forest Thrush, the Bugun Liocichla, and new subspecies of the Sclater’s monal (Lophophorus sclateri arunachalensis) have recently been recorded from the state. Diverse landscapes and varied climatic conditions also offer suitable habitats of various migratory birds, viz, the Black-necked crane, the Ruddy Shelduck, and the Spot-billed pelican.
Arunachal Pradesh has the highest diversity of hornbills in the country, as it is home to five different species (out of 9 species recorded from India),namely, the Great Hornbill, the Rufous-necked Hornbill, the Wreathed Hornbill, the White-throated Brown Hornbill, and the Oriental Pied Hornbill.
The rich and unique bird diversity of state makes it a very ideal destination of birdwatchers.
The Eaglenest Wildlife Sanctuary (454 avifauna), the Namdapha National Parks (491 avifauna), the Pakke Tiger Reserve (282 avifauna), the Mouling National Park (114 avifauna), the Dehang Dibang Biosphere Reserve (153 avifauna), the Tawang area (113 avifauna), and the Talle Valley Wildlife Sanctuary (130 avifauna) are some of the potential bird-watching areas in the state.
The author recently participated in a regional workshop on harnessing the potential on bird-watching ecotourism under the Landscape Initiative for the Far-Eastern Himalayas (HI-LIFE) – a project organized by the International Centre for Integrated Mountain Development (ICIMOD), Nepal, in Baihualing village of Yunnan, China, and observed that the villagers of Baihualing have successfully promoted bird-watching tourism. Now this village has become a popular destination for international and national birdwatchers due to its close proximity to the Gaoligongshan National Nature Reserve (GNNR) and the rich diversity of bird species.
The local communities are directly getting livelihood benefits from home-stay operation, local cuisine, transport, bird-watching ponds and hides, bird guide services, selling of local products and souvenir and cultural programs performance. They are also actively involved in various bird and nature conservation activities.
Considering the rich diversity of birds and the presence of important bird areas in Arunachal Pradesh, there is ample opportunity for development of bird-watching ecotourism in the state. Hence, such community driven bird-watching ecotourism initiative needs to be implemented in the state. This will provide alternative livelihood opportunity to local community and will also reduce pressure on the forest and natural resources and ultimately help in conservation of biodiversity.
Bird-watching ecotourism will also a play key role in discovery of new birds species from the state. It could also be one of the climate change mitigation and adaptation strategy for this climate change sensitive Himalayan state.
At present, the Bugun community is involved in bird-watching ecotourism activity in the Eaglenest Wildlife Sanctuary, but there is huge potential for development of bird-watching ecotourism sector in the other areas of state too.
Collaborative actions and wider partnership among stakeholders, mainly forest and tourism departments, research institutions, researchers, non-government organizations, tourism sector organizations, and community are urgently need to harness the bird-watching ecotourism potential of the state.
Capacity building and awareness generation among local community are other important priority areas for sustainable development of community based bird-watching ecotourism in Arunachal Pradesh. [The contributor of the article is Scientist of the GB Pant National Institute of Himalayan Environment and Sustainable Development, North East Regional Centre, Itanagar]