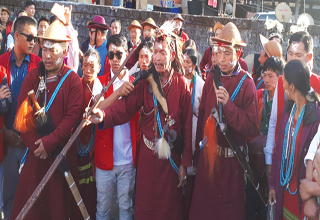 NAHARLAGUN, Jan 4: The arrival of nibus (local priests) at the festival ground here marked the beginning of Si-Donyi festival on Thursday.
Speaking on the essence of the festival, Capital Complex Si-Donyi Festival Celebration Committee Vice Chairman Taniya Soki informed that Si-Donyi is about the preservation of tradition and culture, “unlike other festivals which are mostly agro-based.”
The celebrations will continue for a week, with the main celebration slated for 6 January. The festival also includes traditional sports and cultural events, which have been underway since 16 December, 2017, prizes for which will be distributed on 6 January.