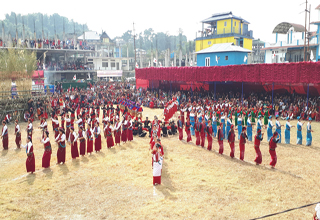 NAHARLAGUN, Jan 6: A major festival of the Tagin community, Si- Donyi was celebrated with traditional fervour at the Si- Donyi ground here by members of the Tagin community residing in Capital Complex on Saturday.
The daylong celebration was marked by several tribal rituals and traditional performances from various cultural troupes, including a mega dance.
Speaking on the occasion as chief guest, Power Minister Tamiyo Taga advocated for cultural exchange amongst all tribes of the state to understand each other better.
Appealing to the youths to carry forward cultural and traditional values of their individual tribes, Taga said, “One must protect and preserve their traditions and culture, and parents must impart knowledge about the same to their children”.
He also informed that the state government has taken up measures to curb criminal activities within the Capital Complex and several important locations would be equipped with LED streetlights and CCTV cameras as a start-up measure.
Also attending the celebrations, Capital Complex Deputy Commissioner Prince Dhawan exhorted youths of the state to defy bandh culture in a peace-loving state like Arunachal.
Capital Complex Si-Donyi Festival Celebration Committee Vice Chairman Tanyia Soki and Secretary Take Lusi Sorum also addressed the gathering, among others.
Taga later released the ‘Ngunge Upper Subansiri’ audio album on the occasion.