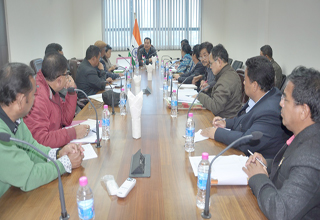 ITANAGAR, Jan 9: Deputy Chief Minister, Chowna Mein has called for submission of innovative schemes to achieve the target of doubling the farmer’s income by 2022. He said this while conducting a pre-budget meeting with the secretaries and directors of agriculture and allied sectors here on Tuesday.
The objective of doubling the farmer’s income by 2022 as envisaged by Prime Minister Narendra Modi can only be achieved with the farming related activities through agriculture and allied sectors, he said.
Mein asked to submit the proposals with five years perspective planning so that the objective can be achieved by 2022.
“Propose some thing new for the coming budget that has not been done earlier to increase the income of the farmers”, he said.
The DCM said that in addition to supply of quality planting materials to the farmers, feasibilities of drip and sprinkler irrigations to the cash and plantation crops should be looked into and provided wherever feasible. He also asked for optimum use of farmer’s portal and e-marketing portal like eNAM for marketing of the local products to the outside of the state which would help to fetch better price to the farmers.
Mein further asked the veterinary and fishery departments to increase their activities and propose schemes that can supplement the agriculture and horticulture income of the farmers. Dairy and poultry farming would give double benefit to the farmers in terms of milk production as well as in achieving the objective of organic farming, he opined.
He called upon the officers and officials of the Fishery Department to go for large scale fish cultivation and also to make all the defunct fish farms of the government functional again. Tourism on fishery is another potential of the state where educated youths and established progressive fish farmers can be engaged, he said.
Secretary Horticulture, Mimum Tayeng, Secretary Agriculture, Y W Ringu and Advisor to Budget, P Aich besides the directors and joint directors of Agriculture, Horticulture, Veterinary and Fishery departments attended the meeting.