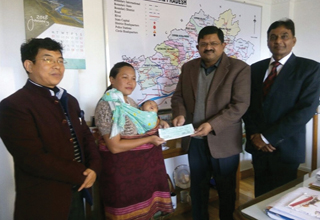 ITANAGAR, Jan 11: Director General of Police, Sandeep Goel, on Thursday handed over a cheque of Rs 50,00,000 to Nada Asha, the wife of deceased IRBn constable Nada Umbing.
Constable Nada Umbing died in a chopper crash on 4 July, 2017, while on duty. He, along with Indian Air Force (IAF) personnel, was helping in evacuating people stranded in Sagalee and Dambuk, following massive landslides caused by heavy rainfall.
Meanwhile, the All Nada Welfare Society, Capital Complex Itanagar has in a release lauded Chief Minister Pema Khandu for releasing the ex gratia sum – which is at par with those received by the bereaved families of the IAF personnel who perished in the same crash – and for giving assurance that the state government would ‘provide immediate appointment in government job on compassionate ground.’