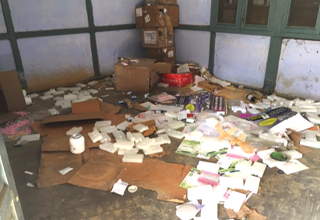 HAYULIANG, Jan 13: Some unidentified miscreants vandalized the old CHC building here on the midnight of 12 January, destroying equipment and medicines, which were kept inside the building for shifting to the Kalikho Pul Memorial District Hospital.
“They broke all the locked doors and window panes into pieces. Cartoons packed with medicines, immunization boxes, ice packs, iron cot, side lockers, disposable syringes, and the like were destroyed and found scattered all over the hospital corridor and drains,” informed Anjaw District Medical Officer Dr K Perme.
A year-old dental chair with accessories was also damaged badly. Laboratory inventories belonging to the KVK which were stored temporarily at the health centre were also damaged, Dr Perme said.
The reason behind the vandalism is still not known.
An FIR has been lodged at the Khupa Police Station in this regard, added Dr Perme. (DIPRO)