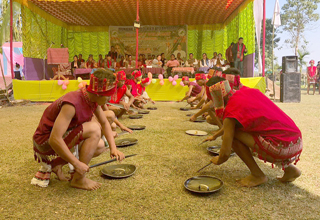 [ Amar Sangno ]
ITANAGAR, Jan 13: The Mikirs are seeking restoration of the lost Arunachal Pradesh Scheduled Tribe (APST) status.
The community residing in the foothills area of Papum Pare district- Chessa, Kokila, Hollongi, Balijan and Tarasso was enlisted as APST as per the Scheduled Tribe Amendment Act of 1950.
Members of the Mikir community were given ST certificates, equal opportunities and benefits by the state government at par with other indigenous communities of Arunachal Pradesh. Evidently, it is said that there was a Nyishi-Mikir Cooperative LAMP Society in Doimukh, established in 1959.
However, their misfortune began after the authorities discontinued issuing ST certificates when ‘Mikir’ was amended as ‘Karbi’ for Mikirs of Assam.
The term Mikir is still considered a derogatory term to describe the Karbis.
According to Papum Pare Deputy Commissioner Tai Kaye, discontinuation of issuing ST certificates to the Mikirs occurred after members of the community started identifying themselves as Karbis in their official documents.
“The ST certificate is only permissible for Mikirs enlisted in the Schedule Tribe Amendment Act 1950, but is not permissible for Karbis,” said the DC.
However, the DC added that the community should convince the authorities through proper procedure and documentation regarding their identity to restore the APST status.
Now, the community has resolved to identify themselves as Mikirs of Arunachal Pradesh, as it is the only mechanism to restore their lost APST status.
To celebrate the redemption from years of denial, the apex organisation of the community under the aegis of Arunachal Pradesh Mikir Welfare Society (APMWS) observed its foundation day at Kokila on Saturday.
Extending his support to the Mikir community to restore their lost APST status, local MLA cum Urban Development Minister, Nabam Rebia stated that Mikirs are one of the original indigenous communities of Arunachal Pradesh.
“There is historical and genealogical evidence that Mikirs (Karbi) of Arunachal Pradesh are one of the original indigenous tribes of the state” said Rebia.
The minister asked all stakeholders, including the All Papum Pare District Students’ Union(APPDSU), the All Nyishi Students’ Union, the Nyishi Elite Society and the All Arunachal Pradesh Students’ Union to come forward to support the cause of the Mikir community to get back their lost APST status.
He asked the stakeholders to give their support in writing so that no complications arise in the future.
“Let us be sympathetic towards the cause of the Mikir community,” Rebia said.
Representing the Deputy Commissioner of Papum Pare, Balijan ADC Chukhu Takar suggested the community to give clarity on their identity to restore their status.
Earlier, APPDSU President Nabam Tado also extended the Union’s support to the community for APST status.
“Since the Mikirs have been taking part in Panchayat elections and possess land rights, the community has every right to know why they are being denied APST status,” said the APPDSU president.
Tado further suggested the community to keep a check on possible influx of other Karbi people in the name of the Mikir community.
APMWS President Chandra Killing sought the support from the Nyishi community and students’ organisations of Papum Pare district for their cause.
Briefing on the historical lineage of Mikirs and Nyishis, the APMWS President disclosed that Mikirs were settled at Emchi, Gumto, Karsingsa, Banderdewa and later migrated to Kokila, Chessa, Hollogi, Balijan and Tarasso.
Earlier, Lower Balijan ZPM Tana Puna and senior citizen Nabam Rungkhi also spoke in support of restoring the APST status of the Mikir community.
According to the 2011 census, the Mikirs spread across Balijan circle has a total population of 1063.