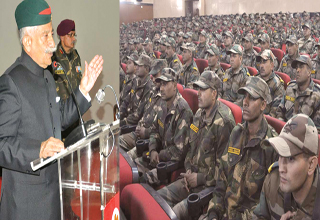 BOMDILA, Jan 15: Governor Dr BD Mishra, who is on a three-day tour of West Kameng district, arrived here on Monday.
The governor, accompanied by his wife Neelam Mishra, was received by Deputy Commissioner Dr Sonal Swaroop, SP PN Khrimey, public leaders and others at Bhalukpong, where the governor interacted with government officials, GBs and the public.
He urged the people to participate in the development of the state “by ensuring transparency, accountability, continuity, review and audit, and midterm correction.”
Advocating the necessity of a healthy, literate society and empowered women for the state to progress, Dr Mishra urged the women and girls to come forward and be partners in the development process.
Saying that scores of tourists come to Arunachal Pradesh to visit Bhalukpong, Bomdila, Dirang, Tawang and other places through Bhalukpong, the governor said that tourism has a huge impact on the socioeconomic development of the people.
He advised the locals to maintain the spirit of ‘Atithi Devo Bhava’ for the overall development of tourism in the state.
Before reaching Bomdila, the governor held a meeting with the General Officer Commanding (GOC) of the 5 Mountain Division, Maj Gen RK Jha, at the Rupa-Gacham cantonment, 20 km from here.
The GOC briefed the governor on the initiatives of the Army for the civilian population, including recruitment rally, motivation programmes among children to join sainik schools, social outreach programmes, medical camps, and such.
He also apprised the governor of the few challenges faced by the Army personnel serving in the state.
At the request of the governor, the GOC agreed to depute surgical specialists and other specialists from the Tenga military hospital to visit primary health centres at least three days a week to address the acute shortage of medical specialists in the civilian medical facilities.
On the day of the visit, which also happens to be Army Day, the governor addressed the officers and personnel of the 5 Mountain Division at the Rupa cantonment. He highlighted the proud history of the Indian Army and boosted the morale of the troops.
Sharing his past experiences in three major wars, the governor said the foundation of the nation’s strength lies in the dedication and zeal of the personnel.
Complimenting the Indian Army stationed in the state, the governor assured the officers and personnel to take up the issues raised in the meeting with the GOC.
He advised them to further strengthen the civil-army relationship and instill a sense of security amongst the civilian population. (PRO to Raj Bhavan)