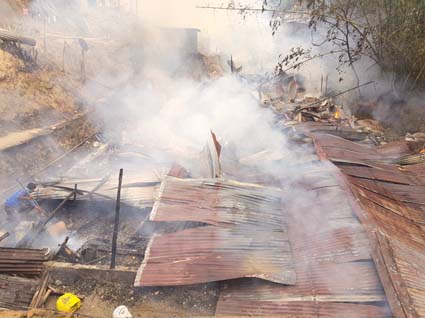 Staff Reporter
ITANAGAR, Jan 18: A massive fire broke out at Romi Colony here at around 2.30 pm on Thursday and completely gutted an entire block of about 12 barrack houses.
The fire is believed to have started from a makeshift kitchen (chaang ghar) at the end of the barrack houses.
Victims and onlookers said that the fire spread rapidly, not leaving anyone with much time to save anything but their lives.
People of nearby colonies could be seen rushing in to douse the fire with buckets of water while impatiently waiting for the Fire Services to arrive and assist them.
The Fire Services did arrive with its trucks about half an hour after the fire started, but was unable to find a way to get into Romi Colony as it is located deep inside, behind the radio colony, with narrow footpaths to reach the area. In the end, the residents managed to bring the fire under control on their own.
Some fire victims managed to save a few essential belongings, but not everyone was lucky as they were at work or outside running errands, and lost everything in the blaze, including important documents.
Some could also been seen looking for their pets who could not manage to escape out of the house.
The police also arrived at the scene after nearly an hour and scanned the area.
Our correspondent adds: UD Parliamentary Secretary and local MLA Techi Kaso rushed to the spot to meet the victims. He consoled the families who lost all their belongings, including household materials and school books.
Talking to media persons, Kaso said fire incidents continue to occur in the capital due to lack of awareness among the citizens. He also said unavailability of passage for emergency services makes it difficult to immediately contain fires.
“The haphazard construction of dwelling houses also adds to such accidents in urban areas,” he said.
Kaso personally contributed about Rs 3 lakh as immediate relief to the victims. He informed that the Capital Complex administration is providing blankets and other essential items as immediate relief.
The victims have been given temporary shelter at the primary school in Romik Colony.
Capital Complex SP Sagar Singh Kalsi, BJP Vice President Tame Phassang, Capital BJP President Tarh Shoping, and IMC Councillor Gora Lotak also helped the victims. This is the second major fire in as many months in Itanagar.
Earlier, 16 kutcha houses were reduced to ashes in a massive fire broke out at Niti Vihar on December 21.