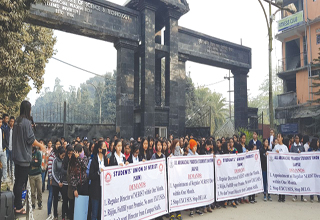 Staff Reporter
ITANAGAR, Jan 24: The Students’ Union of NERIST (SUN), with the support of the All Arunachal Pradesh Students’ Union (AAPSU), staged a protest rally at the North East Regional Institute of Science and Technology (NERIST) campus on Wednesday morning to voice their demand for a permanent director within a month, or to be prepared for complete shut-down of the premier technical institute.
Highlighting on the events that lead to students coming out on to the streets, AAPSU vice president (Admn) Meje Taku informed that the NERIST has been without a regular director since 2013, which has resulted in several academic issues, including lack of proper equipment and supplies in the NERIST (essential for regular projects and such).
The institute’s infrastructure development has also taken a back seat, the unions claimed.
“The SUN has also submitted representations to the Ministry of Human Resource Development (MHRD), but failed to receive a response, while some PhD scholars have been discouraged and left the institute owing to several such issues,” Taku informed reporters here.
Also questioning the assurance given by Minister of State for Home Affairs Kiren Rijiju in November last year that a new and permanent director would soon be inducted, Taku sought to know why one of the most reputed institutes of the North East was ignored by the MHRD.
SUN president Banta Natung also said that although current director in-charge, Prof Tamo Mibang has managed to fulfil some requirements of the institute, he is also bound by certain limitations.
“Prof Mibang is overloaded with work as he is also the Vice Chancellor of the Rajiv Gandhi University and cannot be expected to give all his time to the requirements of the NERIST. This is one of the prime reasons why a permanent and regular director is a necessity for the institute,” Natung said.
Natung also said that they would make separate appeals to the governor (who is the NERIST Society President), the Board of Management and the NERIST director for an early solution.
Also citing previous unpleasant experiences with directors in-charge (who were faculty members of the NERIST), the SUN said that it would prefer if the permanent director is someone from outside the state.
“Someone from outside the state would share new ideas with us and help in our growth as students”, he said, adding that “the students and scholars in the NERIST cannot spare time for protests or bandhs, but we had to because the lack of basic requirements affect our education.”
AAPSU General Secretary Tobom Dai also informed that “If the authorities concerned fail to provide a permanent director for the NERIST by 24 February, the institute would be locked down for an indefinite period”.
Dai also informed that they would soon submit a memorandum to Union MHRD Minister Prakash Javadekar and seek his intervention.
The SUN has been seeking a permanent director since 2013 and the additional extension of Prof Mibang as the director in-charge, has irked students.
Prof Mibang reportedly refused the extension of charge and wrote to the MHRD for early release – but the ministry nevertheless entrusted him with the charge till the end of March 2018.
Prof Mibang has been in charge of the NERIST since February 2017. His assumption as the director in charge of the NERIST was marked by sporadic protests spearhead by the SUN in April 2017. The SUN forced the institute to shut down for a couple of days, demanding a regular director.
Unconfirmed sources informed that Prof BV Ramana Reddy of the University School of Information Communication and Technology, Guru Gobind Singh Indraprastha University, New Delhi was selected for the coveted post, and was supposed to join by 28 December, 2017.