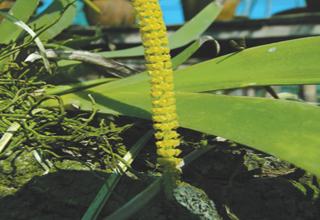 ITANAGAR, Jan 29: A new population of small epiphytic orchid belonging to the genus Oberonia has been discovered from Tengapani range in Namsai district.
The discovery was made recently by Botanical Survey of India (BSI) scientist Dr Krishna Chowlu. She is a native of Namsai district and is also the first and only scientist from Arunachal Pradesh working in the BSI.
The young scientist discovered the new orchid population during a regular floristic survey.
Sharing her experience, Dr Chowlu said, “The plant was collected in the vegetative stage, and almost all the Oberonias are difficult to differentiate in their vegetative stage. After its flowering, a critical and comparative study of the live material through available literatures, and with herbarium consultation, revealed this collection as a new species with a close affinity to the Oberonia gammiei. Molecular studies also supported the description of this taxon as a new species. It was later published in an international journal called Phytotaxa.”
She informed that out of about 1350 species of orchids reported from India, about 560 species are found in Arunachal Pradesh.
The distribution status and taxonomy of many species of orchids are not yet properly known. Therefore, systematic study about these species is of paramount importance.
Some of the species are unique, rare, or endemic. Such orchids are particularly prevalent and are confined to high altitude and dense forests.
“The richness of Arunachal Pradesh has still a lot more to be discovered,” added Dr Chowlu.