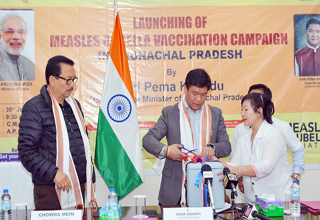 ITANAGAR, Jan 30: Chief Minister Pema Khandu on Tuesday launched the Measles-Rubella Vaccination Campaign (MRVC) in the state, targeted at eradicating measles and controlling rubella.
As many as 5 lakh children in the age group of nine months to below 15 years are targeted for vaccination in the state during the campaign, which will start on 1 February.
Symbolically un-boxing the vaccine, Pema appealed to all stakeholders, especially parents, to get their children vaccinated. He sought active support and cooperation from community-based organizations for the success of the mission.
The vaccination drive will be carried out in all educational institutions and health and community centres, the CM said.
“It is our duty to immunize our children, especially the girl child, from the diseases, so that our future generation grows up healthy,” Pema said, and appealed to the all the deputy commissioners to “take personal ownership of this campaign.”
He appealed to the citizens to extend their full support to the campaign to ensure that no child is left unvaccinated, and directed the health department officials to reach out to every targeted child and vaccinate them.
Under the MRVC, all children in the target age group will be given a single shot of the MR vaccine, irrespective of their previous measles/rubella vaccination status or measles/rubella disease status.
This additional campaign dose will boost the immunity of the child and protect the entire community by eliminating transmission of measles and rubella.
The measles vaccine is currently provided under the Universal Immunization Programme; the rubella vaccine will be a new addition.
After completion of the campaign, MR vaccine will be introduced in routine immunization, and will replace the measles vaccine given to children between 9 and 12 months and 16 and 24 months of age.
Deputy Chief Minister Chowna Mein, his cabinet colleagues, Health & Family Welfare Parliamentary Secretary Phurpa Tsering, Chief Secretary Satya Gopal, the health commissioner, and other officials were present during the launch. (CMO)