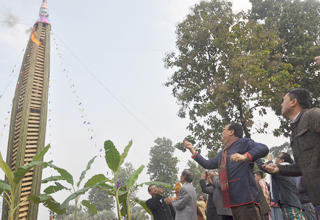 NAMSAI, Jan 31: Deputy Chief Minister of Arunachal Pradesh, Chowna Mein on Wednesday attended the Theravada Buddhist festival, popularly known as Mai Ko Som Fai at Kongmu Kham (Golden Pagoda) here on Wednesday.
People from all walks of life, dressed in their traditional attire, came to witness the occasion with much fanfare and enthusiasm.
The festival offered also devotees some entertainment as Deputy Chief Minister Chowna Mein lit the stack of firewood early in the morning.
On the occasion, Mein released the first edition of the Tai Khamti Primer Grade-I, published by the Tai Khamti Heritage & Literary Society (TKHLS) in collaboration with the Tai Khamti Singpho Council (TKSC), which has been brought out with an aim to protect, preserve and promote the vanishing language and literature of the Tai Khamti community.
He also released the Tai Khamti translated version of Daivadasakam, a 10-verse prayer penned by Narayana Guru circa 1914 which has been rendered in 100 languages and is set to enter the Guinness Book of World Records.
Gireesh Unnikrishnan, a journalist by profession, is the person behind carrying out the translation mission of Daivadasakam to 100 languages and has chosen 40 Indian and 60 foreign languages for this magnificent project.
It is for the first time that one of the literary works of Sree Narayana Guru is getting rendered in 100 languages, with the Tai Khamti language being one of them to find a place in the book.
On the occasion, Tai Khamti and Tai Phake fonts were also released by the DCM and Planning Parliamentary Secretary Chow Zingnu Namchoom, besides releasing the Tai Khamti calendar published in memory of His Holiness Late Ven Silabangsa Mahathero (the Rajguru of Chongkham Buddha Vihara) and others like Tai alphabet chart ‘Kho Lin Tai”, wood carved Tai Khamti baby dolls “Mao Hikta & Ye-Sawah” and releasing the video of visit of TKHLS to Khamtilong and video of celebration of Poi Pee Mau festival at Tamu.
Lauding the efforts of the TKHLS for carrying the translation and publication works, Mein said that language and literature is an integral part of one’s identity.
“If we lose our language and literature we lose a big part of ourselves. The effort of the entire team of TKHLS to document the Tai Khamti language and literature is commendable”, he added.
“I believe that Tai Khamti language Primer-I will not only help in promoting and preserving the language and literature but will also help to sensitize and familiarize the younger generation with their mother tongue”, Mein added.
Arunachal University of Studies, Professor Venerable Pragyasila Bhikkhu highlighted the importance of celebration of Mai Ko Sum Fai festival. He said that it is a ritual ceremony held on the full moon day of Magha connected with the offering of fire.
On this auspicious occasion, a stupa-like structure is made up with stacks of firewood. The entire stack of firewood is then offered to the Buddha. A feast is organized and the stack is set on fire early in the morning.
He said that the Khamtis celebrate many festivals and rituals which are connected with the events associated with Buddhism. Rites and rituals are performed with Buddha, Dhamma, Sangha Vandana, Khamapana, taking refuge in Trisarana and observance of Sila. At the end of every ritual Metta Bhavana Gatha is recited for well being of all sentinels.
Among others, DC RK Sharma, SP CK Mein, ADC Bijoy Talukdar, Chairman Tai Khamti Singpho Council CK Namchoom, Vice Chairman UNIMIT from Thailand Thanapat Choompolsil and Prof Krit Chaisinboon attended the programme. (DCM Media Cell)