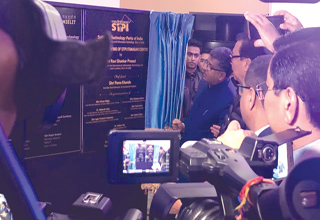 ITANAGAR, Feb 3: Union Minister for Electronics and Information Technology and Law and Justice Ravi Shankar Prasad called upon the Government of Arunachal Pradesh to focus on taking up more technology based programmes to fulfil the dream of ‘Digital India’ as envisioned by Prime Minister Narendra Modi.
“No digital darkness should prevail in the North East and particularly in Arunachal. If the North East and eastern India does not develop, India will not develop,” said Prasad who was here in the capital on Saturday to lay the foundation of the Itanagar center of Software Technology Parks of India (STPI).
Software Technology Parks of India is a society established in 1991 by the Indian Ministry of Communications and Information Technology with the objective of encouraging, promoting and boosting the export of software from India.
The minister on the occasion also inaugurated the extension centre of the National Institute of Electronics & Information Technology (NIELIT) in Tezu which comes under Lohit district.
The NIELIT is an autonomous scientific society under the administrative control of the Ministry of Electronics & Information Technology (MoE&IT).
The union minister also announced that one of the biggest centres of NIELIT would soon open in Itanagar and the same would act as a centre of good governance and model for the entire North East.
Stressing on creation of more Common Services Centres (CSC) in the state, Prasad said that the Arunachal government must make sure that all the 1735 gram panchayats of the state must have at least one CSC each which would provide an access point for delivery of essential public utility services, social welfare schemes, healthcare, financial, education and agriculture services, and such.
CSC scheme is one of the mission mode projects under the Digital India programme of the central government.
Prasad further emphasized on Business Process Outsourcing (BPOs) in Itanagar and said that the same would not only generate revenue for the state but also help curtail the problems of unemployed.
To promote the concept of e-Hospital, the minister announced that nine district hospitals of the state, viz Namsai, Tezu, Tawang, Changlang and others would be soon declared as e-Hospitals by his ministry.
Chief Minister Pema Khandu in his address highlighted the digital initiatives taken by his government in the past year and a half.
He informed the visiting minister and dignitaries from the MoE&IT about the hurdles Arunachal faces in terms of connectivity and communication due to its topography.
Also speaking on the occasion, Deputy Chief Minister Chowna Mein highlighted on the connectivity challenges faced by the state due to its rough terrain. The DCM said that for the successful implementation of GST, the state needs its own dedicated Wide Area Network (WAN) to seamlessly connect its tax offices to GST servers. He placed the requirement of VSAT connectivity as it stands today.
He also informed that the Tax department is struggling to undertake basic functions due to absence of dedicated WAN in the state.
“Lack of seamless connectivity is adversely affecting our taxpayer services as well”, he said and asked for the Union minister to address the issue.
The secretary and joint secretary of the MoE&IT also spoke.