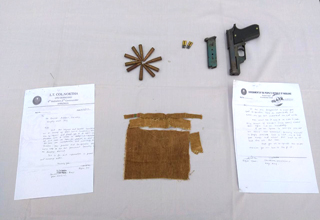 LONGDING, Feb 4: Security forces nabbed a self-styled assistant political officer of the NSCN (U) from here on 3 February.
Jangnee Lukham was apprehended during an operation carried out by the Longding battalion of the Assam Rifles on the night of 3 February, informed Kohima-based defence spokesperson Col C Konwer.
“He was trying to terrorize and extort money from Longkhao village,” the spokesperson said.
A pistol with ammunitions (both AK47 rifle and pistol), extortion notes and other incriminating documents were seized from Lukham.
“He had been an active part of the banned outfit since 2011, and the NSCN (K) from 2010 to 2011. He had also been involved in extortion and abduction cases in Longding, and was apprehended twice in 2011 and 2012 by the security forces,” the defence spokesperson said.