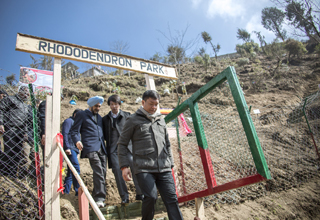 TAWANG, Feb 6: In a bid to conserve the dwindling rhododendron species of Tawang, Chief Minister Pema Khandu on Tuesday laid the foundation stone for a rhododendron park here.
The Park is in two patches of area – 0.28 ha and 0.83 ha. Patch one was planted with 16 different species of Rhododendrons in first phase including Arboreum, Nerifolium, Hodgsonii, Keysii species of Rhododendrons.
The Park was conceptualised and designed by Dr. Abdul Qayum, DFO social forestry Division Tawang with inputs from RK Singh, APCCF & Omkar Singh, PCCF & Prin. Sec (E&F).
It is expected to be a recreational center for not just the residents of Tawang but also for Tourists.
Over 30 species of rhododendron will be planted and conserved in the park. It will also have a modern nursery, an information centre, resting sheds, and a parking facility, among other things.
“The park will not only add to the scenic beauty of the town but also help conserve the rhododendron species, which are seriously threatened by the ongoing road construction and land acquisition projects of the BRO and the Army,” said the chief minister.
He said Tawang was once home to around 100 species of rhododendron. The number has now been reduced to only 50+ as a result of construction activities in the border areas.
Pema said the Army and BRO personnel could play a key role in conservation of the tree species, since the high altitude border areas are beyond the reach of forest officials.
Later, he planted different varieties of the trees in the park.
The park will be partly funded under the BADP.
The chief minister also inaugurated the Nature Interpretation Centre (NIC) here, established and managed by the forest department.
NIC has three sections on Wildlife including Red Panda, Rhododendrons, Medicinal plants and high altitude lakes while a section is on people & culture of Tawang and awareness activities along with issues and challenges which very often dept faces such as forest fire, pests and diseases and deforestation.
Earlier, the chief minister visited the NIC exhibition centre, which displays information on the flora-fauna and the wetlands of Tawang district, supplemented by audio-visual facilities.
Nature Trail in a forested area of 2.3 ha was also inaugurated where there were 42 species of Timber and Non-timber species including Orchids & Primulas. A bamboo hut has also been constructed for the Tourists.
A coffee Table book authored by Dr. Abdul Qayum, Omkar Singh and RK Singh was also released by Chief Minister.
CM advised the Forest Dept to setup such nature Trails and NIC in other districts as well.
Such centres will sensitize people about the importance of conserving nature, and help them admire its beauty and benefits,” Pema said.
He asked the forest department to identify more areas for developing similar forest parks in the town. He advised the department’s officials to keep in mind that development of the area must not cause ecological imbalance.
To meet the manpower shortage at the NIC here, the chief minister directed the forest department to send a proposal in this regard. He gave assurance that the state cabinet would clear the proposal quickly.
He also informed that the state government has created several posts in the Tiger Protection Force, which will be filled through recruiting unemployed local youths.