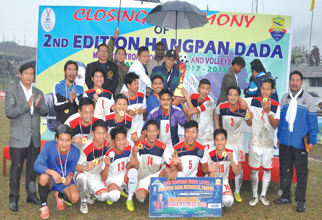 AALO, Feb 7: Lower Subansiri lifted the second State level Hangpan Dada Memorial Men’s Football Trophy beating Changlang 3-0 in the final at the general ground here on Wednesday.
At halftime, both the teams were locked goalless.
Lower Subansiri came out all guns blazing in the second half and pumped in three successive goals to snatch victory.
The winner was awarded Rs 5 lakh along with the coveted trophy, while runners up Changlang was awarded Rs 3 lakh with a trophy.
Trophies and prizes to the winners and runners up of men’s and women’s volleyball and women’s football were also given away.
Winner of women’s football West Siang was awarded cash prize of Rs. 2 lakh with trophy and runners up Kra Daadi was Rs. 1 lakh.
Capital Complex, the winner of men’s Volleyball was awarded cash prize of Rs. 2 lakh along with trophy while runners up East Kameng was given cash prize of Rs. 1 lakh.
Winner of women’s volleyball Kra Daadi was awarded cash prize of Rs. 2 lakh along with trophy and runners up Kurung Kumey was given cash prize of Rs. 1 lakh.
Tok Sera of Lower Subansiri and Yati Yorung of West Siang were declared as the best men and women football players respectively.
Nangram Palo of Capital Complex and Kipa Nani of Kra Daadi were declared as best men and women volleyball players.
The closing ceremony was attended by Adviser to Chief Minister Wanglin Lowangdong, who spoke about how sports foster unity and bring a sense of oneness among all tribes.
He informed that Hangpan Dada hailed from his same native village and was a dedicated soldier.
Lowangdong stressed the need for developing sports infrastructure in all the districts, adding that organizing this tournament in his home district Tirap would be more befitting to pay tribute to the brave soldier.
Sports and Youth Affairs Parliamentary Secretary Nyamar Karbak expressed his happiness over successful conclusion of the event with the cooperation of people of Aalo and Kamba. (DIPRO)