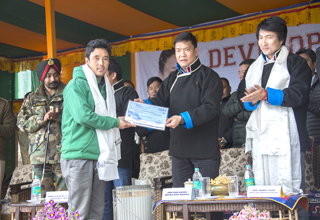 TAWANG, Feb 7: Chief Minister Pema Khandu on Wednesday distributed compensation to the tune of Rs 40,80,38,400 to the landowners from Bomja village whose lands were acquired by the Indian Army.
Distributing land compensation cheques to the 31 landowners at a development meeting held at Lhou village in his home constituency Mukto, the chief minister said that 200.056 acres of land was acquired for housing key location plan units of the Tawang Garrison of the Indian Army.
The highest compensation was handed with a cheque amount of Rs 6,73,29,925, followed by cheque amount of Rs 2,44,97,886. The other 29 beneficiaries were each handed with cheque amount of Rs 1,09,03,813.
Khandu informed that more such compensation for lands acquired for defence purposes are being worked out with the centre. He thanked Defence Minister Nirmala Sitharaman for sanctioning the long overdue land compensation.
The chief minister said the state is now moving on the right track under Prime Minister Narendra Modi. “With support from the centre, Arunachal is witnessing rapid development with great focus on connectivity – rail, air, digital and road,” he said.
The CM informed that Tawang would soon be connected with rail, and informed that the Union Budget of this year had made allocations for construction of tunnel under Se-la pass, which will cut down travel time by an hour.
Regarding the achievement of the state government within a year, he claimed that the present government has made tremendous achievements in administration, health, education, connectivity and other sectors. All big pending projects such as civil secretariat, assembly building have been completed and projects such as convention hall, highways will be completed soon, he added.
RWD Parliamentary Secretary Jambey Tashi, Tawang MLA Tsering Tashi, ZPC Jambey Tsering and Tawang DC Sang Phuntsok also spoke on the occasion. Also present on the occasion were Commander of 190 Mt Brigade Brigadier MP Singh.
Earlier ADC Lobsang Wangchu Bapu presented a brief report on development under Jang sub-division. (CMO)