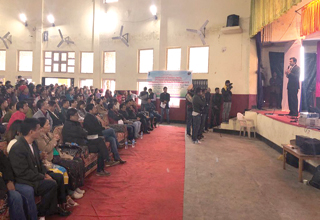 Staff Reporter
ITANAGAR, Feb 7: 30 Itanagar-based NGOs were roped in under the Itanagar Municipal Council by the district administration to take over the cleanliness drive for Swachh Survekshan in Itanagar.
The district administration has outsourced the cleanliness mission to NGOs under the IMC in order to carry out effective cleanliness drives around the city.
The NGOs would look after the cleaning of each ward and engage sanitation workers to keep the city clean.
Capital Complex Deputy Commissioner Prince Dhawan informed that 40, 000 dustbins have been procured and each household would be provided with two dustbins to segregate waste at the source itself. According to a survey by the IMC, the twin city has between 22 to 25 thousand households.
There are 600 labourers working under sanitation in 30 wards. Each of them would be given sanitation equipment, including GPS wrist bands for attendance and tracking the workers during work hours, the DC informed.
To monitor the effectiveness of NGOs working in cleanliness drive, Dhawan said that a circle officer and assistant engineer would be deputed to monitor the work in each ward.
The district administration seeks to bring Itanagar to the list of top 50 cleanest cities of India in 2018″, said Dhawan while seeking cooperation from the residents of the twin capital to turn this idea into a living reality.
The DC was addressing a sanitation event here on Wednesday.
The DC also briefed about the new initiative of the installation of GPS tracking device on sanitation vehicles to track the real time movement of vehicles. If a vehicle does not come to pick up garbage, it would immediately come to the knowledge of the concerned authorities through SMS and e-mail.
Highlighting the role of NGOs/SHGs who have been outsourced for door to door collection of municipal solid waste, the DC stressed that apart from cleaning and collection of garbage, they should ensure timely collection of garbage collection charge.
They should also issue challan (penalty) to every individual who is caught littering or against households that do not hand over garbage to the garbage collectors.
He also emphasized upon the importance of segregation of wastes into biodegradable and non-biodegradable waste.
During the programme, the DC also lauded C-1 SHG, who is in charge of Ward 10, for collecting the highest garbage collection charge.
Deputy Chief Councillor Tarh Nachung expressed hoped that the new system will help in better garbage management.
CMEO Olik Taring and Municipal Executive Engineer Tadar Tarang also spoke on the occasion.
Later, the DC distributed essential sanitation items like jackets, gumboots, raincoat, gloves etc to the sanitation labourers. (With input from DIPRO)