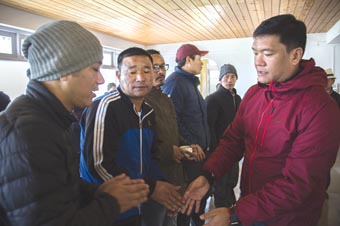 DIRANG, Feb 8: Chief Minister Pema Khandu on Thursday met the families affected by the fire accident that had occurred here in West Kameng district on 27 January.
At least 50 houses and shops were razed by a devastating fire in the market area here, which is thickly crowded and lined with houses and shops on both sides of the road. Though no human casualty was reported, loss of property worth several crores of rupees has been unofficially estimated.
Putting up at temporary relief camps and with relatives, the victims of the mishap are slowly rebuilding their lives.
Taking stock of the relief and rehabilitation measures initiated by the district administration and the departments concerned, Pema expressed solidarity with the victims and offered the government’s assistance in rebuilding their lives.
Interacting with the victims and the people of Dirang in general, the CM said he constantly monitored the relief and rehabilitation operation through the district administration.
“I was in constant touch with local legislator Phurpa Tsering and gave him a free hand to extend support to the victims,” Pema informed.
He lauded those who assisted the personnel from the fire brigade, the SSB, the NDRF, the NIMAS and the district administration in dousing the fire. The CM assured that compensation for the losses incurred would be given to the victims after the district administration has submitted the assessment report.
Admitting that the official compensation would be meagre compared to the actual losses incurred by the affected families, Pema said he along with the local MLA would find ways to add to the official compensation, so that the affected families at least get compensated at par with their losses.
He appealed to the people to be “extra cautious” with regard to fire as burning firewood and lamps is an integral practice in the state, especially in the highlands.
The chief minister also noted that the absence of a fire station in Dirang is of concern, and said the state government is aware of it. He said the process for establishing a fire station here, with sufficient firefighters and fire tenders, would be initiated at the earliest.
As a personal contribution for the rehabilitation of the affected families, Pema donated Rs 10 lakh, and promised to provide more in the days to come. He also called on everybody to donate voluntary for the cause.
Officials of the district administration and public representatives were also present during the interaction. (CMO)