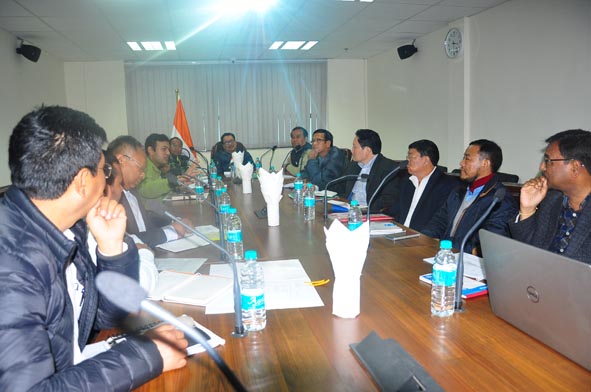 ITANAGAR, Feb 8: Deputy Chief Minister Chowna Mein has set a new deadline for completion of Package-A (Chandranagar to Papu Nallah) of the four-lane National Highway 415 project: March 2019.
He gave the timeline during a high-level meeting with the MoRTH’s Itanagar Regional Officer (RO) M Riten Kumar Singh, PWD Commissioner Bilatee Pertin, Highway Chief Engineer Toli Basar, Capital Complex Deputy Commissioner Prince Dhawan, engineers of the PWD & Highway Capital Division, and representatives of M/s TK Engineering here on Thursday.
Expressing dissatisfaction over the slow progress of work, Mein asked the contractor to expedite the work and increase the number of machineries and the working hours. He asked them to work night shifts, especially in the Chandranagar to Raj Bhawan portion of the road, as the area is congested with traffic during the day.
He also instructed the contractor to construct the retaining wall in the secretariat portion before the onset of monsoon, and to ensure that no major damages occur in landslide-vulnerable parts in the new cutting areas in Itanagar.
PWD Parliamentary Secretary Techi Kaso asked the district administration to shift the utility service lines such as water pipelines, electric poles, telephone poles and OFC cables from the right of way, and to take stringent action against officers who do not comply with it.
The executing agency sought complete traffic diversion between Chandranagar and Raj Bhawan during GSB/WBM and BT works for 30 days from 10 February, which the deputy commissioner assured to look into.
The issue of the Potin to Pangin Trans-Arunachal Highway project was also discussed during a high-level meeting convened by the DCM this evening.
Mein informed that the road was handed over to the MoRTH by the state PWD in 2014 after the former assured to maintain and widen it. However, due to many issues, including land compensation, the road widening and construction has been over-delayed and could not be taken up by the MoRTH on time.
He asked the MoRTH RO to carry out repair and maintenance of the road from Potin to Pangin before the onset of monsoon.
The MoRTH RO agreed to take up the matter with the ministry and carry out the repair and maintenance of the road in batches.
Chief Secretary Satya Gopal said since the road has been handed over to the MoRTH, it is the duty and responsibility of the MoRTH to maintain it. He asked the MoRTH RO to prepare a time-bound action plan for repair and maintenance of the road before the onset of monsoon, saying non-maintenance of the road is causing inconvenience to the people and hampering economic development of the region.
The MoRTH RO assured to help the state government in maintenance and improvement of road networks in the state. (PRO)