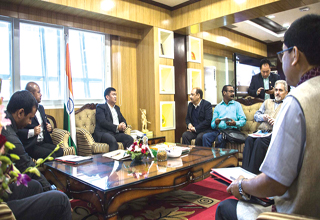 ITANAGAR, Feb 12: A seven-member inter-ministerial team of the central government on disaster management, headed by the home affairs ministry’s Joint Secretary Prakash, is on a two-day visit to assess the losses caused by natural disasters in the state. The team will also submit a report along with recommendations to the central government.
The team on Monday surveyed the damages caused in and around Itanagar and Naharlagun and is scheduled to visit the flood-ravaged districts of Lower Siang, East Siang, Lower Dibang Valley, Lohit and Namsai on Tuesday.
The team also called on Chief Minister Pema Khandu at his office here. The chief minister told the team that natural calamities, and the heavy losses caused by them, are a perennial problem faced by the state due to its unique geographical and topographical features.
“With limited resources of its own, the state has to depend mostly on central government aids to repair and restore the damages and losses,” Pema said.
“Besides heavy damages to our infrastructure, last year we lost more than 40 human lives to natural calamities, which cannot be counted in terms of monetary aids,” he said.
The CM suggested that the team visit the state immediately after the monsoons to witness for themselves the havoc created by natural calamities like landslides and floods.
“Our monsoons are long and heavy, from April till September, and cause suffering to the people by washing away buildings, roads and bridges. With more than half of the population living in interior and mountainous landscapes, relief and rehabilitation processes are slow and tedious,” he said.
He expressed optimism that the team would highlight the problems and issues specific to Arunachal Pradesh in their report.
Prakash admitted to the unique position of Arunachal Pradesh in terms of recuperating from the losses. He mentioned “recreating damaged infrastructure” as one of the biggest challenges for the state in disaster management.
“We understand that costs of construction materials get doubled or even more by the time these reach the sites. We will keep this in mind in our recommendations to the central government,” Prakash said.
He added that the state government may submit its report by September – the end of the monsoon season – so that the inter-ministerial team could visit the state to assess the losses by October, when the damages are still fresh.
Chief Secretary Satya Gopal, who along with Disaster Management Parliamentary Secretary Kaling Moyong and Disaster Management Secretary Bidol Tayeng was present at the meeting, informed that this year the damages due to natural calamities have been assessed at Rs 1037.61 crore, as on 31 December, 2017.
“In the last seven years the damages had amounted to more than Rs 11,000 crore, against which the state received only about Rs 700 crore as central assistance in the form of SDRF and NDRF, and this has resulted in accumulation of about Rs 10,000 crore over the years,” he said.
Gopal requested the central government to consider a comprehensive package as restoration and mitigation fund for the state government to meet the huge gap that has been accumulated over the years.
The inter-ministerial team later held a meeting with officers of the line departments, during which the officers enumerated the damages and losses caused to their respective departments last year by natural calamities.
(CMO)