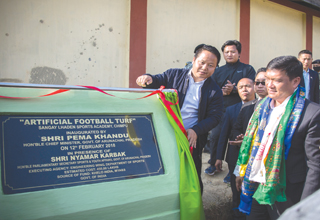 Staff Reporter
CHIMPU (Itanagar), Feb 12: Chief Minister Pema Khandu on Monday inaugurated the state’s first artificial football turf at Sangay Lhaden Academy Sports Complex (SLSA) here.
“The project, sanctioned under the Khelo India programme during 2014-15, has been carried out at an estimated cost of Rs 4.5 crore. The engineering wing of the sports department executed the work,” informed Director of Sports Tadar Appa.
The Centre had also, in 2010-11, approved Rs 5 crore for a hockey Astroturf at the SLSA. About 75% work is complete for the hockey Astroturf and it is expected to be fully laid by the end of this month.
A friendly football match was played between Chief Minister’s (CM’s XI) and Arunachal Pradesh Football Association (APFA) on the occasion.
The CM’s XI, led by Home Minister Kumar Waii, went down fighting 2-4 to APFA XI.
APFA vice presidents Kipa Takum and Likha Tapu, and members Joram Apa and Koj Tatung scored a goal each for the winning team.
For CM’s XI, Kipa Bharat and Youth Affairs Joint Director Ramesh Linggi scored a goal each.
Earlier, the chief minister felicitated the U-19 football team of the state for their stupendous performance in the recently held Junior Football Championship for BC Roy Trophy in Himachal Pradesh. The team lost 0-1 to Jharkhand in the semifinals.