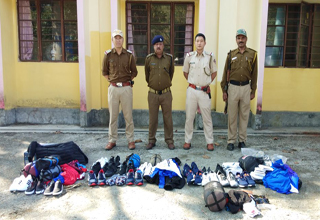 [ Karyir Riba ]
ROING, Feb 12: The police here in Lower Dibang Valley district on Sunday busted a gang of teenage burglars, arrested four of its members, and recovered stolen booty from them.
After receiving a complaint of burglary from a shopkeeper on Sunday, the police swiftly launched an investigation and rounded up four suspects within a few hours.
“During interrogation, they confessed to their crime before the police. The group has allegedly been involved in several burglary cases in Roing town for the last couple of years,” said investigating officer, SI Abraham Taying.
Reportedly, documents reveal that all the four apprehended are juveniles. The police have registered a case against them and launched further investigation.