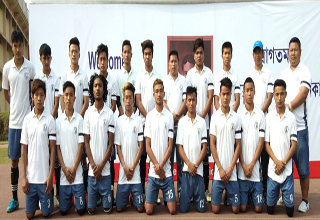 Big win not enough for Arunachal to advance to semis

GUWAHATI, Feb 26: RD Karma scored hat-trick as the Arunachal U-21 football team registered a thumping 6-0 victory over powerful Manipur in their last group match of the Dr T Ao Memorial NEC Gold Cup at Guwahati on Monday.
Unfortunately, today’s impressive result could not propel the team into the next (semifinal) round. They ended the championship campaign with a loss, a draw and a win.
Arunachal started the match brilliantly with RD Karma scoring his and the team’s first goal within five minutes of the play. He netted two more goals to become the first player to score a hat-trick of goal in the ongoing tournament.
Taw Akash, Vivek Gurung and Karli Ngomdir scored a goal each.
Dado Sham was adjudged “Man of the Match.”
“Our young lads have shown great character and professionalism against the much fancied team and the result is more than satisfying. The boys displayed all round performance,” said Tapi Apa, head coach of the team.
“It’s unfortunate that we could not reach the semis, but we are going home with a lot of positivity and learning experience, which will definitely help improve our performance in the future.” said Gibbs Taba, the team manager.
To pay homage and as a gesture of solidarity for the recent minor rape victims, the team wore black arm bands during their matches in the tournament.