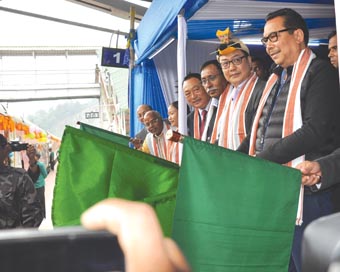 NAHARLAGUN, Mar 1: The new Naharlagun-Anand Vihar Terminal Arunachal Express was jointly flagged-off from the Naharlagun Railway Station on Thursday by Union Minister of State for Home Affairs, Kiren Rijiju, Union Minister of State for Railways, Rajen Gohain, Deputy Chief Minister, Chowna Mein and Member of Parliament (Lok Sabha), Ninong Ering.
The express train to Delhi from the state capital was earlier announced by Prime Minister Narendra Modi during his visit to Itanagar on February 15 last.
Union Minister Gohain said the Indian Railways was planning to expand its network in the entire Northeast including Arunachal Pradesh.
“With the inauguration of the Bogibeel Bridge over Brahmaputra River likely in May-June this year, Assam and Arunachal Pradesh will immensely benefit as the bridge will reduce distance between Itanagar and Eastern Arunachal districts,” the Union Minister of State for Railways said.
The minister informed that in the 2018-19 Union budget proposals have been made for electrification of Rangiya-Rangapara North-Harmutti-Naharlagun section of the broad gauge line with a total distance of 398 km and the works would be executed by Central Organisation for Railway Electrification (CORE).
He asked the Arunachal Pradesh government to resolve the issue of land compensation involving laying of broad gauge line from Murkongselek in Assam to Pasighat in Arunachal Pradesh at the earliest.
Gohain expressed dissatisfaction that the work on the 24.36 kilometre railway line has been stopped due to land compensation issue raised by the locals and appealed to the Arunachal Pradesh government to resolve the issue at the earliest by fixing reasonable compensation amount so that the project could be started soon.
“The compensation amount claimed is more than the project cost for which work on the railway line has been stopped,” he said.
Later, talking to reporters, Gohain disclosed that the Railway ministry has already sanctioned an amount of Rs 400 crore for undertaking final location survey of Misamari-Bhalukpong-Tenga-Tawang line (378 km).
“Detailed project report will be prepared after completion of the survey and the work on the line will begin soon,” he added.
Speaking on the occasion, Rijiju said, “Arunachal Pradesh is poised for a giant leap in the developmental front with survey of 11 railway projects in the state going on which will change the face of the state soon.”
“New Delhi is willing to work for Arunachal Pradesh but the problem lies with the state as the state government has failed to clear land acquisition process for any important project,” he said and added that there was no dearth of fund from the Centre.
Rijiju requested Gohain to provide railway jobs to the youths of Arunachal Pradesh in all categories as per laid down norms.
The Prime Minister had announced increasing the frequency of the Naharlagun-New Delhi AC Express train from one day a week to twice and to rechristen it as the ‘Arunachal Express’.
Deputy Chief Minister Chowna Mein stated that development process had begun for Arunachal Pradesh with BJP-led NDA government at the Centre attaching priority to Northeast considering it as the Engine of Growth for the country.
“The Centre is ready to help Arunachal Pradesh and we should take advantage of various projects like industrial corridor along the foothill areas of the state and frontier highway along the international border,” Mein said.
Lok Sabha MP from Arunachal East constituency Ninong Ering requested Gohain to initiate measures for construction of railway lines along the international border to answer China s infrastructure development in the border.
The new train, known as ‘Arunachal Express’ would cover the 2013 kilometre distance between Naharlagun and Anand Vihar Terminal in little over 38 hours and would have 14 stoppages en-route. It will start running regularly from March 8 next.
With all air-conditioned LHB (Linke Hofmann Busch) coaches, the train would offer all comfort and facilities to the passengers, NFR general manager Lokesh Narayan said during the flag-off ceremony.
This is the second direct train for Arunachal Pradesh and 14th for North East to connect with the national capital.
It has a scheduled departure time from Naharlagun Railway Station on Saturday at 21:35 hrs in the evening and has arrival time of 11:30 hrs at Anand Vihar Terminal in Delhi on Monday. The same train with no. 02412 has a departure time from Anand Vihar Terminal (Delhi) at 15:50 hours on Thursday and arrival time of 05:50 Hrs at Naharlagun on Saturday.
Among others, Parliamentary Secretary Karya Bagang and Chief Secretary Satya Gopal were also present on the occasion. (With DCM/ PTI inputs)