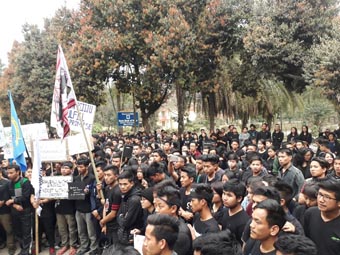 Staff Reporter
ITANAGAR, Mar 1: Finding himself in a pool of criticism over the inordinate delay in appointment of a regular director for the NERIST, Union Minister of State for Home Affair Kiren Rijiju on Thursday blamed the Ministry of Human Resource Development (MHRD) for the delay in appointment, even as eight students began a hunger strike from Thursday as part of the indefinite agitation at NERIST.
A computer engineer student, Kipa Tacha started the fast unto death, which was later joined by seven other students: Ige Riram, Karlu Lollen, Dikkar Taji, Rakesh Roy, Rupam Khargharia, John Tamin and Taw Hari Tara.
“I am very unhappy with the development. Whatever has happened is not good,” Rijiju said, adding that despite his rigorous pursuance, the MHRD is delaying the process.
“I am not a minister (MHRD) but I take the full responsibility as it is a matter of my constituency” he added.
Rijiju said this while interacting with media persons on the sideline of the Arunachal Express flag-off ceremony at the Naharlagun Railway Station.
Meanwhile, toughening its movement, the Students’ Union of NERIST (SUN) in its campus, observed Rijiju’s train flag-off ceremony as a ‘black day’ and donned black clothes and black bands which read #save NERIST.
Hundreds of students chanted slogans in different languages of the region against the MHRD and MoS Rijiju for their “false promises”.
The students were also visibly upset that the MoS did not bother to visit the campus and listen to their grievances.
“We will continue our indefinite strike until the MHRD sends someone to look after this premier institute,” said SUN president Banta Natung while addressing media persons.
“Ignoring NERIST is ignoring North East,” the SUN president said, while adding that the centre must realize that the NERIST caters to students from eight northeast states, including different parts of India too.
“If anything happens to the agitating students, Rijiju will be held responsible,” Natung added.
Extending solidarity to the SUN, the All Arunachal Pradesh Students’ Union (AAPSU) has cautioned the centre as well as the state that the issue may have a spillover effect, if it is not addressed early.
Addressing a solidarity rally, organised by the Rajiv Gandhi University Students Union (RGUSU) at the RGU campus, AAPSU general secretary Tobom Dai exhorted that the central and the state governments should heed to the genuine demand of the SUN.
“The issue will not be confined to the NERIST campus, but will have a spillover effect and have far-reaching ramifications,” Dai said, and appealed to the government to address the SUN’s demand at the earliest.
“The spark taking shape in NERIST should not be neglected,” the AAPSU GS added while informing that the apex students’ organisation is holding a meeting at the NEFA Club on the NERIST issue on Friday.
Joining the movement, RGU faculty cum social activist Professor Nani Bath expressed concern over the current situation in the NERIST campus.
Speaking at the solidarity rally at RGU, Professor Bath exhorted that NERIST is not only the pride, but also identity of the North East. He also appealed to the protesting students not to disrupt the functioning of classes.
USU president Giogi Aja and AAPSU vice president (Admin) Meje Taku also spoke on the occasion.
State BJP president Tapir Gao, general secretary Jarpum Gamlin and state secretary Doni Nich also arrived to meet the students at the NERIST.
Gao reassured that, “as per my telephonic talk with Javadekar, we will have a permanent Director in NERIST within a week”.
Speaking to the agitating students, he said, “I have spoken to Union HRD Minister, Prakash Javadekar and CM Pema Khandu right before reaching your campus.”
However, the students rejected the offer as it has had enough of assurances.
“Our institution’s ranking has slipped beyond top 100, whereas NERIST had seen days where we were in top 20,” said Natung.
AAPSU president Hawa Bagang also extended unflinching support to the cause of the SUN’s demand.
“We will not back off from the agitation till an official order of the posting of a Director is shown to us,” added Bagang.