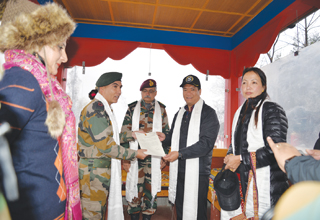 TAWANG, Mar 3: Chief Minister Pema Khandu has assured that the state government would ensure early establishment of Rajya Sainik Board in the state.
He also informed that the subject of Rajya Sainik Board, which was under the Disaster Management Department earlier, is now taken up under the Home department.
Pema gave the assurance to Major General R K Jha, GOC 5 Mountain Division, Tenga when the latter called on him at the DK Memorial Museum, Famla near here on Friday last.
Major General Jha had impressed upon the CM to take up establishment of Rajya Sainik Board at the earliest in order to infuse a sense of belongingness and encouragement to personnel of the armed forces.
Issues ranging from land acquisition, compensations matters, recruitment rallies and Rajya Sainik Board were also discussed during the meeting.
Briefing the CM about the status of compensation issues of other Army occupied areas, Major General Jha said that the matter is being expedited and the locals will soon be handed over compensation money.
The chief minister also lauded the Army for facilitating recruitment rallies in different locations in the state, which has given local youth ample chance to get recruited in the Indian Army.
Further, the CM handed over a letter of appreciation to Lt Col Manu Virmani of Hq 190 Mtn Brigade of Tawang for his concerted effort in establishing excellent civil-army relations in Tawang.