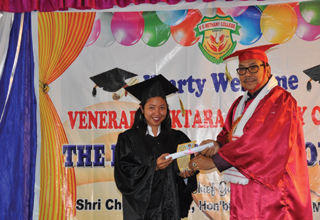 MANMOW, Mar 4: Deputy Chief Minister Chowna Mein presided over the first graduation day of Venerable Uktara Bethany College here in Namsai district on Saturday.
In his address to the first graduates of the college, he exhorted the students to dream big and work hard to excel in life.
Citing unemployment as a mounting problem as thousands of students graduate every year, he said that the government can create and provide limited jobs and everyone cannot be absorbed in government jobs.
He advised the students to develop sense of competitiveness and look for opportunities in other alternative areas.
He lauded the Vivekananda Trust, Bethany College Trust, Mohabhodi Trust and Rama Krishna Mission for their humanitarian services in the field of education and health services by establishing educational institutions and health care facilities across the state.
He said that the need of the hour is to improve quality of education in the school level for building strong base for the children.
Mein also paid tribute to the catholic education in North East India, particularly in Arunachal Pradesh.
Reminiscing his long association with the catholic education, as an alumnus of Don Bosco School in Guwahati, he highlighted how the catholic institutions render yeomen service without looking for profit and without much support from the government.
Further, the DCM commended the district administration and NGOs for their action against poppy cultivation and drug menace in the district. Calling for concerted effort by all the stakeholders, including parents and students, he said children and students should raise voice against parents who take up poppy cultivation as a source of earning as such activities spoil the society.
He said that the government will provide alternate source of livelihood for poppy cultivation.
He asked the people to participate in the budget portal launched by the chief minister and place their suggestions too.
Earlier, Sister Noeline BS, Administrator in the introductory speech highlighted the achievements of the first batch graduates of the college.
She informed that Tojam Mossang (of the college) has topped amongst the graduates in Rajiv Gandhi University in 2017 and won the Gold Medal in Political Science.
Sister Joy BS, Provincial Superior of North East Provision cum President of Bethany College Trust, Sister Teresa Martis BS, Principal and father Felix Anthony also spoke on the occasion, while Gold Medalist Tojam Mossang delivered a speech on college memories.
On the occasion, the deputy chief minister gave away certificates of graduation to the students of Bethany College.
Chau Zingnu Namchoom, Parliamentary Secretary for Planning & Investment, C K Manpoong, former MLA, R K Sharma, DC, Bijoy Talukdar, ADC, Sister Joy BS, Provincial Superior of North East Provision cum President of Bethany College Trust, Sister Teresa Martis BS, Principal and father Felix Anthony gave away the award of academic accolades.
The students also presented colourful dances reflecting various tribes of the state to mark the first graduation day.