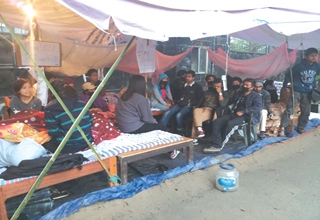 Students of the North Eastern Regional Institute of Science and Technology (NERIST) can be seen still going strong with their protest against the non-appointment of a regular director since 27 February. Several volunteer students under the Students’ Union of NERIST (SUN) are also on a hunger strike since 28 February. The NERIST and SUN are receiving support from various quarters, with the AAPSU calling for shut-down of all colleges and universities in the state on Monday. The SUN and other student unions of the institute have decided to block the national highway on Tuesday if documents to prove that a regular director has been appointed, is not shown to them.