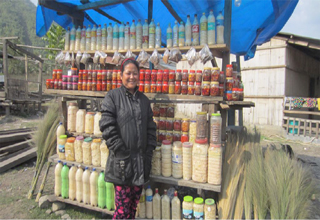 [ Neyi Jamoh ]
Three years ago, Anu, an entrepreneurial Arunachali woman, relocated to Elephant Flat after having experienced the big city life in Guwahati. Elephant Flat is a small village on the Bhalukpong-Tawang highway close to protected areas, such as Sessa, Eaglenest and Pakke. This was where I met her while working around the Pakke Tiger Reserve and this was a drastic change for her as well as her two-year-old daughter. She loved the place but constantly missed her friends. Many said that village life would be tough on her and that she may have to move back to a town again.
Though she had never earned, her life was secure on the economic front. Her husband has a successful business in the pharmaceutical supply line. But she always felt a sense of longing to do something of her own and contribute to her children’s education or towards her own personal growth. But work was hard to come by and she couldn’t work very far from home as she had to take care of her young daughter.
But things changed two years ago when she went on a family trip to Shillong. She was fascinated by the bright pickles displayed on the Shillong-Guwahati highway and was inspired to see how the women there had created opportunities for themselves with locally available resources.
She knew she had found her calling. She went back home and within a month started pickling and displaying them along the highway that passes through her village.
She started off making a few achaar varieties of bamboo shoot, chillies and shrimp.
This was a pleasant surprise to commuters. In the early days, many would stop just out of curiosity to see what was going on. And the positive response from travellers has resulted in her selling more than ten varieties of pickled items, including jolpai (Indian Olive), khordoi (Carambola), jackfruit and pork.
She sources raw materials from the women in the village and other villages, such as Bana, Jameri, Bomdila and Bhalukpong market. Apart from pickles, her highway stall sells fruits, such as oranges, pineapples and bananas which are grown locally.
Elephant Flat was just another small village en route Bomdila, Seppa or Tawang, but is now a pleasant stop to sip chai, buy fruits and achaar.
In terms of sales, all days are not alike. What keeps her motivated is bulk orders for parties or gifts; people coming back to her stall and/or strangers looking for her pickle stall through word-of-mouth. She considers her contributions towards her children’s school fees as something to look forward to everyday.
Most women in the village did not have income generating options apart from small-scale agriculture. And as the agricultural season got over, many would remain unemployed for two to four months a year. And so Anu’s venture easily intrigued and interested other women in the village. Many were shy and apprehensive to approach her. But when they saw the positive response of commuters to her business, they wanted to try their hand as well. Anu shared her art with four women who initially approached her, followed by a group of five others. This was a great achievement for her given that she was considered an outsider in the village.
Currently, there are nine such stalls; she constantly keeps updating her recipes through YouTube tutorials on pickling. This keeps her ahead in the game as she provides new varieties where buyers feel maximum satisfaction for money they spent.
This small and simple venture has created opportunities for women in the village in ways other than pickling alone. Women are starting to look at other opportunities such as selling handicrafts. Some have started small hotels and are exploring new income avenues. A small spark has created a fire that is catching up – and such are the impacts of women like her. (Neyi Jamoh is presently a PhD student at ATREE, Bengaluru and has previously worked around the Pakke Tiger Reserve where she witnessed the entrepreneurial spirit of the women there)