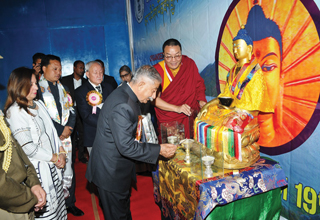 BOMDILA, Mar 19: A three-day National Conference on Buddhist Education at Central Institute of Himalayan Culture Studies (CIHCS) started here at Dahung.
Governor of Arunachal Pradesh Dr B D Mishra in his inaugural speech said that by following the message and teachings of Lord Buddha, the peace and progress for human beings can be achieved. He said that the teachings of Lord Buddha are as relevant today as these were 2500 years ago.
“The teachings of Lord Buddha seek the upliftment of the downtrodden, non-violence, freedom from superstition, education for all, knowledge and social amity”, he said.
Highlighting the importance of Lord Buddha’s teachings, the governor said that today world faces many challenges such as terrorism, fundamentalist, violence, corruption, backwardness, poverty, superstitions, and parochial political situations.
The governor said that Mahatma Gandhi also followed the path of non-violence, shown by Buddha to get freedom for the country.
Earlier in his address, Director CIMCS, Dahung, Geshe Ngawang Tashi Bapu briefed about the conference and the Central Institute of Himalayan Culture Studies, Dahung. (PRO)