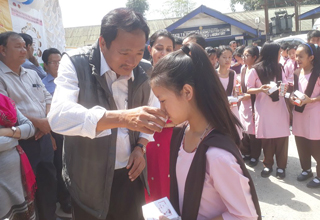 ITANAGAR, Mar 19: The National De-worming Day (NDD), observed all over India on 10 February every year, was launched at various districts of the state on Monday.
Special Secretary Health and Family Welfare- cum- Mission Director, NHM, GoAP, Dr Tapasya Raghav, while launching the NDD at the office premises of Mission Director and Health and Family Welfare at Naharlagun on Monday, informed that as per state-wise comparative statements, Arunachal Pradesh is found to be at the lowest position (6th position) in terms of de-worming coverage.
She stated that the state government is now committed to provide de-worming tablets to each and every child of the state to improve their well being.
Director H&FW, Dr Kabang Lego and Nodal Officer Health, Dr Tana Natung and officials, besides school children were also present on the occasion.
The programme was also launched at Holy Child Academy, Karsingsa in Papum Pare district and Gyati Takka General Hospital in Lower Subansiri district.
National De-worming Day was also launched in East Kameng by administering an Albendozale tablet to a child by Deputy Commissioner DC in-charge D J Borah at District Hospital, Seppa. (DIPROs)