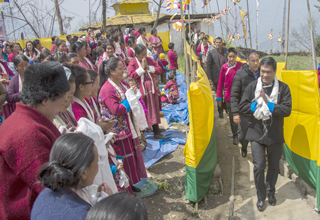 TAWANG, Mar 25: Chief Minister Pema Khandu on Saturday informed that Rs 15 crore has been sanctioned under the BADP for establishing a VKV in Mukto in Tawang district.
The CM made the announcement during a religious gathering at Kitdhung Gompa there, after attending the ritual of installation of the statue of Buddhist deity Chenrezig (four-armed Avalokte-shvara) in Ku-Brah Mukto village.
The statue was gifted to the village by His Holiness the Dalai Lama.
Addressing the religious gathering at Kitdhung Gompa, the chief minister said, “It is a blessed moment for all of us as His Holiness himself gifted the sacred idol to Mukto village.”
The CM earlier offered prayers at the gompa. He said he would provide fund for the gompa’s renovation, and announced that a cultural centre would also be established in Mukto.
Tawang MLA Tsering Tashi, Abbot of Tawang Monastery Gangkar Tulku, and Tawang DC Sang Phuntsok also spoke. (CMO)