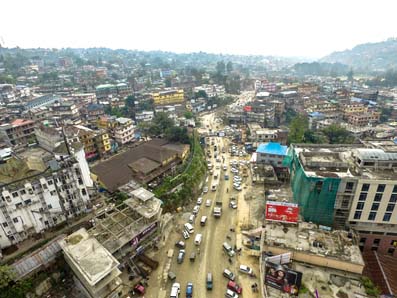 ITANAGAR, Mar 29: In the last decade the capital complex has seen a massive increase in traffic congestion with the influx of people and vehicles from across Arunachal. And with the ongoing construction of the Trans-Arunachal Highway in the capital complex, the twin towns seem to be perpetually engulfed in layers of dust and grit. Combined with the current road condition, commuting in the capital complex has become a nightmare, especially for riders of two-wheelers, and pedestrians.
Factors like topography, wayward city planning, and bottleneck junctions spread across the town are major factors of the traffic congestion. The lack of proper public transportation systems interconnecting the capital complex forces the public to invest in private vehicles, thereby adding to the already over-encumbered roads.
Another factor that is often easily avoidable yet persistent in causing mayhem on the roads is the almost complete lack of traffic discipline in Arunachal Pradesh. The Arunachal Pradesh Police (APP) had their hands full managing traffic even before the rampant urbanization. With the induction of the Itanagar traffic wardens (ITW), there seems to have been some major improvement, but there are yet miles to go before driving in Arunachal Pradesh can be deemed safe or even civilized.
“We do our best to ensure road safety and smooth traffic flow, despite having insufficient manpower,” said G Arangham, Sub-Inspector (Traffic), Itanagar. The APP has only 20 personnel on traffic duty in the capital. The traffic police in Itanagar are inducted from within the general police on a roster basis.
“Hearing verbal abuses and threats from the commuters has become routine. We are trying to help; we are just doing our jobs,” added Arangham.
Each shift in traffic duty lasts six hours in all weather, inclement or dusty.
On being questioned about penalizing traffic rules violators, especially violators of the ‘No parking’ space, Arangham stated: “We use wheel lock system to impound the vehicle. However, there is a shortage of wheel locks because many violators simply exchange the locked wheel and steal the locks in the process, too. We do not have enough personnel to monitor every impounded car.”
On the other hand, the recently created ITW, which is currently under the Administration department, lacks teeth to make effective changes in traffic regulations. Given no real authority apart from directing traffic, they are often ignored by the public. ITW personnel suffer the same plight as that of the traffic police, but perhaps in a greater magnitude and for much lesser pay.
“There are way too many cars in the capital complex and it is very difficult to manage (traffic) during rush hour,” said an ITW personnel. “We work throughout the year with no leave, and our pay is deducted if we are absent even in case of emergencies,” he added.
A traffic warden is paid an average of Rs 8000 monthly. The ITWs have been appointed on a ‘muster roll’ basis, which states that their service is on ‘need basis’ and could be terminated at any point of time.
In comparison, the city of Shillong (in Meghalaya), which shares similar topography with Itanagar but with almost triple the population (2011 census) has much better traffic management despite the occasional congestions, the key factors being sound traffic discipline and strong enforcement of traffic rules.
The city of Surat (population 45 lakh), which was heavily dependent on private vehicles and auto-rickshaws, started the Bus Rapid Transport System (BRTS), which resulted in reduction in the use of private vehicles and auto-rickshaws by 87%, as per a National Traffic Award citation.
The public must realize that better infrastructure alone will not solve the traffic issues. This is a collective endeavor which requires constant effort from all strata of the society, including the government and the pedestrians. The need to improve the public transport services is paramount to ease the traffic load of the city. Hopefully, with the completion of the Trans-Arunachal Highway, that day will come soon enough.