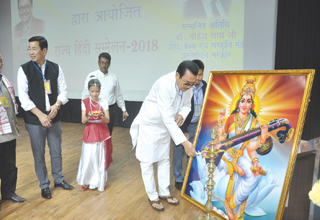 ITANAGAR, Mar 31: Stating that many tribal dialects in the state are on the verge of extinction and many have become endangered, Deputy Chief Minister Chowna Mein urged the younger generation to preserve and promote their mother tongues besides learning Hindi or English.
He said this in his address at the Rajya Hindi Sammelan organized by the Arunachal Hindi Sansthan (AHS) at the Dorjee Khandu Convention Hall here on Saturday.
“Hindi is not imposed on us but it has been willingly adopted by the people of the state,” the DCM said. He expressed hope that the AHS would give a new direction to the promotion and expansion of the Hindi language in the state.
Describing Arunachal Pradesh as “the hotbed for research scholars in the entire Northeast,” Mein said he hoped to see research scholars from among the local educated youths document and conduct research on the daily lives of the various tribes of the state to preserve and protect the state’s rich cultural heritage.
He said he had during his tenure as education minister decided to introduce the social study subject in both Hindi and English languages, focusing on all the major sub-tribes of the state.
“The introduction of social study subject in schools in the written form is necessary to preserve, protect and promote the rich culture and traditions of all the tribes,” he said.
He also said the state government is committed to preserving and developing the important historical places in the state.
Accepting AHS chairman Takam Sonia’s suggestion for inclusion of traditional stories, folklores, local conventions, religious places, tourist attractions, etc, of the state in courses for Class 1 to 7, Mein asked the AHS to submit the proposal in written form.
Informing that the present state government is working to promote Hindi in the state, Art & Culture Minister Dr Mohesh Chai said, “Arunachal is the only state in the entire Northeast where young and old people in villages or towns feel proud to speak in Hindi.”
Among others, AHS advisor Tai Tagak, RGU Hindi professor Dr AK Pandey, and AHS chairman Takam Sonia addressed the gathering.
Earlier, Mein, accompanied by Dr Chai, Indigenous Affairs Chairman Nabam Atum, and advisor to CM, Tai Tagak launched the Hindi magazine ‘Arunoday Bhoomi’, and the website of the AHS: https://arunachalhindisansthan.org/.
They also felicitated scholars who have contributed immensely in promoting the Hindi language in the state.
Mein expressed hope that the launch of the first edition of ‘Arunoday Bhoomi’ would be “a medium to identify the hidden talents in the state and provide them a platform to nurture their talents in the Hindi language.”
Cultural performance by students, poem recitation by Dr Taro Sindik, and screening of an animation video on ‘Hindi varnamala’ were the other highlights of the event. (PRO)