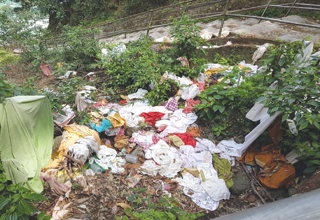 [ Nellie N Manpoong ]
ITANAGAR, Apr 9: People are sinners by nature, and we strive to rid ourselves of our sins through charity, sacrifice, confessions and, sometimes, with a dip in the holy waters.
The stories of penance surrounding Parshuram have many devotees rushing to his kund (some 45 kms away from Tezu in Lohit district) in hopes that the waters of the Lohit river will wash away their sins.
There are several variants to the original story, but all of them lead to the lore in which Parshuram kills his mother, Renuka, at the orders of his father, Jamadagni. Parshuram’s famed axe gets stuck to his hands as a result of committing matricide, and the only place where his axe comes free of his hands is in the Lohit River.
This legend, coupled with stories of Parshuram axing the mountain into two for the Lohit river to flow in its current course, has now turned the kund into a pilgrimage site, which sees about a thousand visitors daily and over 5 lakh devotees during Makar Sankranti each year in January.
Like other such myths and legends, this story of the sixth avatar of Vishnu has made us humans come up with our own perception of doing penance. Pilgrims visiting the site have made the kund filthy in the name of washing away their sins. As one takes those tedious steps – up and down – leading to the Brahma Kund (where Parshuram is believed to have meditated) and closer to the currents of the river, piles of clothing can be seen scattered around the stairway.
We saw T-shirts, jeans, sarees and even underwear stuck to the rocks and boulders near the shore.
Two pundits sitting by the Brahma Kund told us that people have concocted stories that after a dip in the river, one has to leave behind every piece of clothing on their body by the riverside as an “offering” to the river. This is a theory that even the head priest believes has no real relevance to the worship of the lord.
“Taking off your clothes won’t wash away your sins. Even the holy waters of the kund won’t help if your heart is not in the right place,” said one of the pundits.
Head priest of the kund, Hari Charan Das, who is widely popular as Parshuram Baba, said volunteers are sent every week to collect the discarded clothes and dispose of them in whatever way possible.
“We can’t tell each and every person not to throw their clothes away. They not only throw away clothes, but sometimes tie up rice and money in them and set them afloat on the river, polluting it. These clothes, rice and cash or coins can easily be donated to someone in need,” he said.
We noticed that there was no signboard requesting visitors not to offer clothing and other articles, but then, such a sign would also hurt the sentiments of devotees who believe otherwise.
While the ashram surrounding the kund is well maintained by some 30-35 holy men and semi-permanent residents of the ashram, with the support of devotees who donate every now and then, the place does require some mechanism to tackle the heavy flow of tourists, who indulge in unnecessary polluting activities.
The government views this site as a place with potential for religious tourism, but as a priest here aptly put it, “The sanctity of the place gets lost in the term ‘mela’ – the Parshuram Kund Mela. A mela is where people come to indulge in fun activities and break a lot of boundaries. This is a dhaam (a holy place) and faith pulls people to this kund more than anything else.”
While this famed ashram in Arunachal Pradesh sustains on donations from devotees, mostly from Assam, the state government has taken some initiative to improve the living conditions by providing a pipeline, electricity, concrete stairs and a guest house nearby (which is yet to be completed).
There is still much space for improvement in terms of providing basic necessities to those who live there permanently and those who come to stay as guests – again on donations that the ashram receives. There is also the need to come up with a mechanism to donate the discarded clothing to the needy.
While we wait on those improvements, we can only hope that the government, and the people who come from all over the world, do not turn this incredible site with breathtaking beauty into a dumping site.