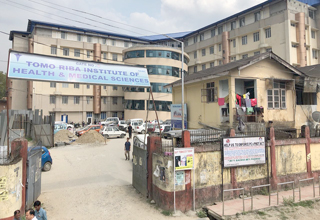 ITANAGAR, Apr 10: Even as the deadline to start the Tomo Riba Institute of Health and Medical Science (TRIHMS) is approaching fast, the state authority is apparently creating a big mess in order to get the letter of permission (LoP) from the Medical Council of India (MCI) in haste.
A group of doctors on condition of anonymity alleged that the TRIHMS director misled the members of the MCI who had come to inspect the TRIHMS (prior to issuance of LoP) by making up the number of faculty members in his report.
The TRIHMS reflected 89 faculty members in total (six professors and associate professors each; 26 assistant professors; and 51 senior and junior residents and tutors), but the group of doctors claimed that out of six professors, Dr Jayakumar P is a dean, “who is a surgeon, but who was reflected as professor of paediatrics department.”
The doctors also claimed that out of 26 assistant professors, 20 are from the Arunachal Pradesh Health Service (APHS), three doctors have already resigned from the TRIHMS, and a dermatologist has been promoted as joint director.
Also, from among the 51 junior and senior residents and tutors, 12 doctors have reportedly been absorbed through the recent one-time relaxation, which led to the appointment of 74 junior/senior specialists. Thirteen candidates have cleared the APHS examination for junior specialists, while five candidates have cleared post graduate courses.
The doctors claimed that in reality only 11 out of the 51 residents/tutors are left.
“We are there but we are not there at the same time,” a doctor said, adding that though their names were reflected in the faculty list, in reality they are not in.
“This is the main reason we are protesting the manner in which Director Dr Moji Jini is handling the matter. We are not against the medical college but it should be done in a proper way,” a doctor said.
The TRIHMS is supposed to have 21 departments in total; but several major departments, including medicine, ENT and radiology, do not have faculties so far, the group claimed.
Unconfirmed reports allege that nursing students were also shown as recruited staff to the MCI members.
The doctors demanded to know why the director is in a rush to start the session without everything having been set in place.
The TRIHMS is among the 58 medical colleges proposed to be set up across the country by the BJP government. According to guidelines, a medical college should be established in ‘under-served areas’.
However, the Arunachal Pradesh government chose to turn Tomo Riba State Hospital (TRSH) into a medical college and renamed it as TRIHMS through a notification issued on 25 June, 2017.
The TRIHMS overtaking TRSH has triggered protests among the serving doctors of TRSH, as the state’s lone referral hospital is being converted into a medical college that would subsequently be managed by a Society, with the chief minister as its chairman.
The doctors serving under TRSH are demanding that the state hospital be continued the way the Jawaharlal Nehru Institute of Medical Science (JNIMS) and the JN Hospital in Imphal, Manipur are being run.
There is apprehension among the serving doctors that once the TRIHMS takes off, the future of TRSH staffs would hang in uncertainty and the lone referral hospital in the capital would disappear.
The doctors also fear that major chaos would follow after TRSH merges with the TRIHMS, as there are 847 staffers in the state hospital, including 105 doctors.
The serving doctors further argued that the merging of TRSH with the TRIHMS would directly affect national vertical programmes like immunization, tertiary cancer unit, post-mortem, and legal cases.
Meanwhile, the authority claims that the reason behind the serving doctors and other staffs protesting against the conversion of TRSH into TRIHMS is because they do not want to be transferred out of the capital.
Health Commissioner Kaling Tayeng’s note on 2 March, 2018, mentioned that if the MCI accords the LoP to the TRIHMS, the medical college will be able to start functioning this year, and that the all GDMOs/specialists who are not a part of the TRIHMS (except the tertiary cancer institute specialist) will have to move out of the district around August 2018.
The commissioner’s note triggered a spark, prompting a group of doctors to call on Chief Minister Pema Khandu over the issue.
TRIHMS Director Dr Moji Jini has meanwhile refused to respond to the allegations.
The health commissioner clarified that the TRIHMS being taken over by a Society does not mean that the staff from TRSH who joined the medical college would lose pension or other facilities.
“There is a misconception over it; people need to understand that the government itself is society,” the commissioner said.
“If LoP is not issued this year, I doubt whether the TRIHMS would ever able to take off,” said Tayeng, enumerating the technical difficulties and prerequisite criteria to meet the MCI guidelines.
“The MCI will not wait for our infrastructures to be built first. Somehow we have to start, since the Centre is supportive of the medical college in the state,” he added, admitting technical deficiency in terms of faculty and infrastructure.
Even as the authority is in a hurry to start the TRIHMS, the bigger question now is whether the TRIHMS will take off or end up as another greenfield airport, Hollongi.