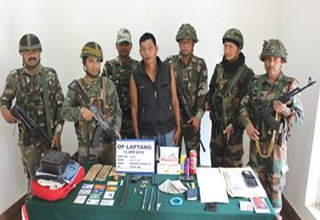 LAPTANG, Apr 13: A self-styled second lieutenant of the NSCN (IM), Khampai Wangsu, was apprehended by personnel of the Assam Rifles during an operation here in Tirap district on Friday.
Wangsu, who was recruited by the banned outfit in 2012, was wanted by the police for a number of cases, including murder and extortion.
A pistol along with ammunition was seized from his possession.
On interrogation, the operative revealed that he was trying to extort the locals and businessmen of Laptang area.