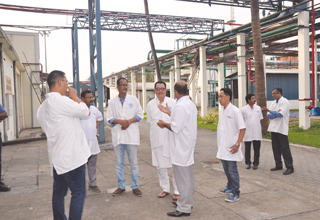 KOCHI (Kerala), Apr 19: Arunachal Pradesh Deputy Chief Minister Chowna Mein sought the support of agro-based industries in Kerala for sustainable development of agriculture in Arunachal.
“Arunachal Pradesh is blessed with fertile soil and favourable climate for agri-horti produces. But due to poor research and development wings and lack of scientific knowledge and technical know-how, the state could not convert its natural resources into revenues,” Mein said during an interaction with the CEO and officials of agro-based industry, Kancor Ingredients Limited (KIL) here on Thursday.
He invited experts from KIL to come to Arunachal Pradesh and participate in the forthcoming agriculture conclave and suggest measures for resurgence of agriculture in Arunachal.
KIL CEO Geemon K Korah expressed keenness to expand and set up a unit of his agro-based industry in the Northeast region, particularly in Arunachal Pradesh.
Mein is in Kerala to attend a function at Kodungallur on 21 April. (PRO)