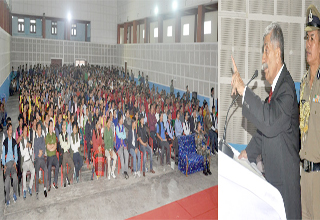 YINGKIONG, May 9: Governor Dr BD Mishra, who is on a four-day district tour, reached Yingkiong in Upper Siang district on Wednesday.
Addressing a public meeting at Yingkiong, the governor said that the pace of development has enhanced in the last few years in the state.
Many important projects have been taken up and fund is being provided accordingly. He called upon the people to shoulder responsibility in ensuring transparency, accountability, continuity, review and audit and if required, midterm correction in the implementation of projects, programmes and schemes of the government.
In his maiden visit to the district with his wife Neelam Misra, the governor appealed to the people to go for entrepreneurship and self employment.
Stating that road communication and IT & mobile connectivity are the most essential aspects of life, the governor advised the road construction agencies, optical fire laying company and Bharat Sanchar Nigam Ltd to work as a unit to expedite the connectivity challenges.
He said that success of many important central and state government schemes and programmes depend on road communication and IT and mobile connectivity.
Emphasising on strengthening the education and health sectors, he said that human resources in health and education departments must be managed in an equitable manner.
Further informing that there are, at present, six Arunachali officers in the Indian Army, Indian Air Force and Indian Navy, whom he has suggested to form a group titled, ‘Pay Back to Society’, he said that the officers will go to schools and colleges in the state and motivate the youth to join Indian Army.
As a token of appreciation to the gaon burahs, the governor presented a ‘Red Coat’ to the senior-most gaon burah of the district, Aduk Nopi gaon burah of Simong village.
Deputy Commissioner Duli Kamduk, Yingkiong Zilla Parishad Members Bading Teng, Tuting Zilla Parishad Members Nyokgon Nitik and Gaon Burah Akkong Libang also spoke on the occasion.
Later, the governor visited the Indian Army unit stationed at Yingkiong and commended their initiatives in providing pre-recruitment training to the local youth and Operation Samaritan.
Earlier, the governor and his wife visited the district hospital and interacted with the doctors and nursing staff. He advised them to take pride in the noble profession and avoid the tendency of referring patients to larger hospitals.
Earlier, the governor, who reached Pangin under Siang district on Tuesday, addressed a huge public meeting. He called upon citizens to be active partners in developmental process.
He also emphasized on twin critical pillars of health and education, especially on educating the girl child.
Disclosing his objective of recruiting over 2000 youth of the state in the armed forces and informing regarding ensuing recruitment in the Indian Army, the governor called upon the public leaders, gaon burahs, Panchayat leaders and government officials to motivate all the able youth and prepare them for recruitment.
In this regard, he advised the youth to raise the literacy standard amongst them.
As a token of appreciation to the gaon burah institution, the governor presented a ‘red coat’ to the eldest gaon burah of the district, 78-year-old Tameng Messar.
State Minister for Power and Industries, Tamiyo Taga and local MLA Tapang Taloh also spoke on the occasion.
On the way to Pangin from Itanagar by road, the governor interacted with gaon burahs at Yembung and advised them to participate in the governance by ensuring proper utilization of government funds and to also make sure that every child above the age of six goes to school.
He also visited a terrace agricultural farm of one Tapang Tamuk at Khardung and interacted with the farmers. He advised the farmers to go for double cropping and cash crops. The governor asked the agricultural and horticultural departmental officers to assist the farmers to double their income.