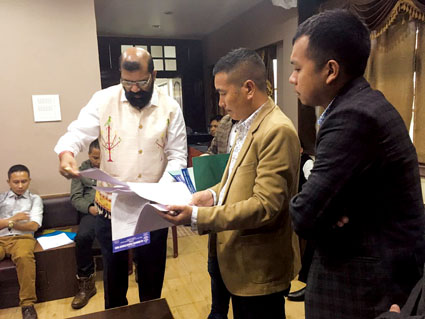 SHILLONG, May 10: The North East Students Organisation (NESO) is conducting a protest rally against the Citizenship (Amendment) Bill, 2016 at Guwahati on Friday, which will witness the participation of members from all its federal units across the North East, including the All Arunachal Pradesh Students’ Union (AAPSU).
The AAPSU team will be led by its general secretary Tobom Dai and secretary debate & symposium Marli Kamki, who also sat in solidarity with the Khasi Students’ Union in a silent protest at Shillong on Thursday.
The AAPSU has urged the state government to display seriousness and take a bold stand against the proposed Citizenship (Amendment) Bill, 2016 and warned of large democratic agitation across Arunachal Pradesh if the centre goes ahead with the bill.
The AAPSU, led by its general secretary Tobom Dai placed this concern while attending the joint meeting with the Joint Parliamentary Committee (JPC) on the Citizenship (Amendment) Bill, 2016 along with apex student organizations of other Northeastern states under the banner of the NESO at Shillong on Thursday
While the AAPSU welcomed the decision of the Chief Minister Conrad Sangma-led Meghalaya Government, which had recently taken a cabinet decision to oppose the bill, it has questioned the stance of the Arunachal Pradesh state government regarding the bill.
A written submission was made to the committee along with oral submissions.
The JPC, headed by Member of Parliament Rajendra Agarwal, was in Shillong to take the views of all the stakeholders regarding the bill.
While putting forth the strong objections of the people of Arunachal Pradesh and the AAPSU towards the bill, Dai said that the proposed bill, if approved and passed, shall have large scale ramifications for a 100 percent tribal state like Arunachal Pradesh.
The union said that the bill would serve as a legal basis for furthering and legitimizing the claims of Chakma and Hajong refugees as the indigenous populace of the state, and also will defeat the very purpose of the Bengal Eastern Frontier Regulation of 1873 and various other regulations currently in force in the state.
The bill aims at granting citizenship to the people from minority communities- Hindus, Sikhs, Buddhists, Jains, Parsis and Christians- from Afghanistan, Pakistan and Bangladesh after six years of residence in India.
“As it is evident that Chakmas are mostly Buddhists and Hajongs are Hindus, the bill, if passed shall automatically make their claims more legitimate”, the union said.
The committee was also informed in brief about the demographic changes in Arunachal Pradesh due to large scale influx of illegal refugees and the legal battle currently underway at the Supreme Court of India.
While urging the JPC to be more sympathetic towards the indigenous communities of North Eastern states, Dai also made a strong appeal to the chairman of JPC to visit Arunachal Pradesh at the earliest to know about the actual ground realities as Arunachal Pradesh will also be greatly affected by the Citizenship (Amendment) Bill, 2016.
While cautioning the union government to respect the sentiments and aspirations of the indigenous communities, the AAPSU general secretary warned those at the helm of affairs not to deliberately provoke the peace-loving people and vitiate the already fragile atmosphere of the North east and also cautioned of large democratic agitation across the state if the centre goes ahead with the bill.
The team from Arunachal also included student activist Chemo Boje and NESO members from the state, Pritam Waii Sonam and Marge Riba.

GAF supports APCC, PPA stance on Citizenship (Amendment) Bill
The Green Arunachal Foundation (GAF) has endorsed the views of the Arunachal Pradesh Congress Committee (APCC) and Peoples’ Party of Arunachal (PPA) over not inviting the Joint Parliamentary Committee (JPC) on the Citizenship (Amendment) Bill, 2016 to Arunachal Pradesh and questioned the state government’s “lackadaisical stance” on the refugee issue.
“The state government must realize that refugee problem in Arunachal Pradesh is among the most potent threats for the people of the state. One must not forget the problems encountered by Arunachal due to the Chakma-Hajong imbroglio. Now, the state is being intimidated by the additional menace of the Tibetan refugees,” GAF chairman Takam Tatung said in a communiqué on Thursday.
In such a situation it proves very irresponsible and unbecoming of the state government not to invite the JPC team to Arunachal Pradesh during their visit to Northeast to take stock and analyse the problems faced due to settlement of refugees, Tatung added.
The GAF has urged the government to be more responsible and to maintain a feasible and holistic approach while dealing with the refugee issue in the state.
The foundation also alleged that despite Kiren Rijiju being the MoS for Home Affairs, no substantial steps are being initiated to solve the refugee problem in Arunachal Pradesh.
Rather, it is felt that the state government and the union Home Ministry renders a soft corner for the refugees, especially the Tibetans.
“At a time when the ‘Giant Dragon’ next door does not tire from claiming parts of Arunachal Pradesh as Southern Tibet, there are reasons to suspect that China might be employing and entrusting Tibetans to spy on us. The security paradigm of the state and the nation must not be overlooked for personal gains”, viewed Tatung.
The organisation has also claimed that there are some Tibetan refugees in the chief minister’s office, holding important and powerful positions.
“This situation, if true, pertains to be very risky for the security of the country,” said the GAF in the release.
“The present state government’s activities show a complete lack of political responsibility and undermining of the pivotal and vexed refugee issue of the state”, the GAF chairman added.