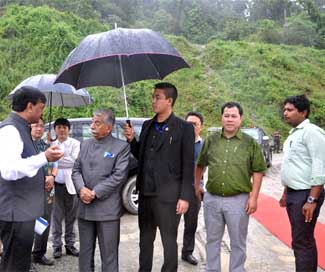 YINGKIONG, May 10: Governor of Arunachal Pradesh Dr BD Mishra met the district heads of departments of Upper Siang district at Yingkiong on 10 May and asked them to rise above the bar of corruption, mismanagement, discontinuity and opaqueness and also plug the leakage of fund.
While the government officials briefed him about schemes, programmes and projects implemented in the district, the governor emphasized that the officials must do something other than their charters of duties, which are usher friendly, fruitful, advantageous and beneficial to the last person on the last rung of the society, state and nation.
Emphasizing on punctuality, discipline and sincerity amongst government officials, the Governor advised them to do away with the ‘lackadaisical approach’.
He underscored that they must have positive attitude and meet the people. They must listen to the challenges of common public and as a professional and technical person, explore innovative ways to mitigate the problems to best of their abilities.
Referring to training component under some programmes, he called upon the officials to motivate the trained youth to stand on their own feet by becoming entrepreneurs and self-employed; to advise them to avail subsidized loan and start their enterprises instead of government jobs.
The governor suggested the officials to go for public-private partnership in implementing innovative projects instead of depending on allocation of government fund.
Reiterating on strengthening education and health sectors, the governor said that if we want to be a vibrant and prosperous nation, we must take care of our children.
The governor stressed on separate functional toilets for girl students in every educational institution. He also advised the education officers to visit schools and check the malpractices in the implementation of midday meals.
The governor said that quality of midday meals must be good and palatable and quantity must be adequate.
Earlier, Deputy Commissioner Duli Kamduk briefed the governor on the developmental scenario of the district.
On the second day at Yingkiong, the governor paid a site visit to the Gandhi Bridge, located 3.5 km from Yingkiong. Public Works Department, Yingkiong Division Executive Engineer, RN Singh briefed the governor about the 300 meters long suspension bridge over River Siang, which connects numerous sub-divisions and circles headquarters on the right bank.