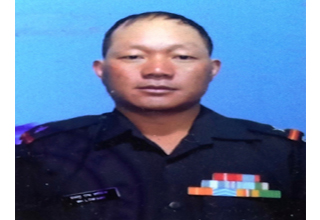 KHONSA, May 21: A pall of gloom descended on Mokttowa village in Tirap district following the death of Wanghian Lowang, a decorated soldier of the 6 Assam Regiment, due to a heart attack on Monday.
A resident of Mokttowa village in Dadam circle, Lowang was on leave to join the annual Hoju Kuhwa festival celebration with his families and friends at his native village.
He was in Lebanon for six months as part of the Indian peacekeeping force, and had just returned from that country (on 30 April). He was supposed to report to his company headquarters on 25 May.
Lowang was awarded the Sena Medal for showing courage and bravery during an operation in Reasi, in Jammu & Kashmir, on 14 August, 2009. During the operation, the Indian troops had come under heavy attack from heavily-armed terrorists. In the retaliatory attack, Lowang had killed one of the terrorists.
Khonsa West MLA Tirong Aboh expressed profound grief over the sudden demise of the young and brave soldier, and described his demise as a great loss for the Nocte community, the state, and the nation.
Aboh assured to provide all possible assistance from his end to the bereaved family. (DIPRO)