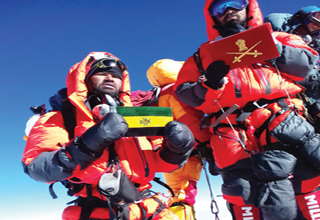 ITANAGAR, May 23: An eight-member expedition team of the National Institute for Mountaineering and Allied Sports (NIMAS), Dirang has successfully scaled the Mt Everest on 19-20 May.
The expedition team under Col Sarfraz Singh had earlier climbed three prominent peaks– Mt Gorichen, Mt Trishul and Mt Lobuche in Nepal as part of advance training for Mt Everest.
The expedition team comprised of six army personnel and two civilians from Dirang. They were Dorjee Khandu and Tongchen Nimsonga.
The Everest expedition was flagged off by the chief minister on 21 March.
Chief Minister Pema Khandu on Wednesday congratulated the team stating that “It is for the first time any national institute of mountaineering of India has achieved such a feat and placed eight mountaineers on top of the Everest in the first attempt” .
He also wished the team best wishes for their future endeavours.