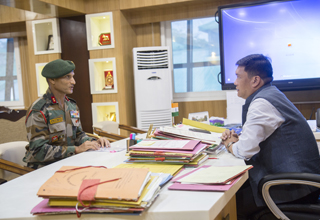 ITANAGAR, May 24: General-Officer-Commanding (GOC) of 2 Mountain Division, Major General Gajinder Singh called on Chief Minister Pema Khandu at his office here on Thursday, and the two discussed issues related to the army’s activities in the eastern parts of Arunachal Pradesh.
Maj Gen Singh, who heads the 2 Mountain Division of the Indian Army based at Dinjan in Tinsukia district of Assam, bordering Arunachal, sought the state government’s intervention in facilitating coordination between the state police, central paramilitary forces, and the army, particularly in counter-insurgency operations along the interstate boundaries.
Intelligence-sharing and logistic support from the state machinery is of utmost necessity for successful operations for tackling cross-border insurgency, he said.
The GOC assured the army’s commitment to ensuring the welfare and safety of civilians during operations, and said the army is ever ready to lend its assistance through medical camps, pre-recruitment training, etc.
Pema said the state government accords topmost priority to the safety and security of its citizens and is committed to cooperate with the army in all its endeavours.
He lauded the 2 Mountain Division for conducting the first ever recruitment rally in Jairampur in Changlang district, and expressed hope that more would follow, especially in Tirap, Changlang, and Longding districts.
To the requests of the GOC regarding camping facilities, firing ranges, and land acquisition, the CM said all these issues would be taken up with the officials concerned and resolved.
He requested Maj Gen Singh to organise more extensive programmes for the local residents that would not only benefit them but also work as a confidence-building measure.
“We are proud of the Indian Army and always ready to be of any help,” the chief minister added. (CMO)