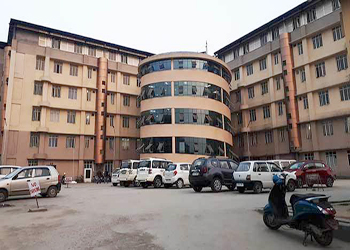 ITANAGAR, May 25: At last the dream of having a medical college in the state has come true for the people of Arunachal Pradesh.
The union health & family welfare ministry has issued the letter of permission (LoP) to the state government to start the academic session of the Tomo Riba Institute of Health & Medical Sciences (TRIHMS) in Naharlagun, with an intake of 50 MBBS students, from 2018-’19 onwards.
Chief Minister Pema Khandu had been continuously pursuing the central government in the matter, and had on several occasions assured to start the medical college in this academic session.
“This is another milestone achieved this year. I congratulate the state department of health & family welfare, authorities of the TRIHMS, newly-recruited faculty members, employees, and would be first-batch MBBS students on this achievement,” Pema said in a happy note after receiving a copy of the LoP.
The letter from GoI undersecretary DVK Rao (dated 15 May), addressed to the state health & family welfare commissioner, confirmed the formal permission granted by the Centre for establishment of the TRIHMS under Section 10 A of the IMC Act, 1956.
The permission has been accorded initially for a period of one year, and will be renewed on a yearly basis, subject to verification of achievement of annual targets as stated by the state government.
“The process of renewal of permission will continue till such time the infrastructure and expansion of hospital facilities are completed as norms of the Medical Council of India and the college is recognized,” the LoP read.
The chief minister appealed for cooperation from all quarters in completing the college’s infrastructure, and assured the state government’s commitment to meet all the norms.
“This college will be an invaluable asset to our generations to come. Let us all pledge not to put any hindrance for personal interest in its growth, expansion and recognition,” Pema said. (CMO)