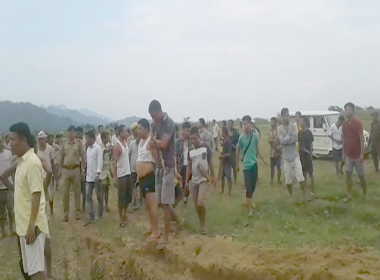 Staff Reporter
ITANAGAR, Jun 5: In a brazen violation of the Supreme Court’s ruling to maintain the status quo along the Assam-Arunachal Pradesh interstate boundary, contractors from Assam reportedly attempted to construct a road inside Arunachal, at Hime village in Kangku circle of Lower Siang district.
The incident reportedly occurred on 19 May when an Assam-based construction company illegally carried out road construction by dumping sand on wet-rice cultivation (WRC) land inside Arunachal territory.
The WRC belongs to 10 households of Hime village. The road was reportedly sanctioned under the Missing Autonomous Council (MAC).
When information about the encroachment reached the villagers in Hime, they rushed to the spot and halted the machines. The intervention led to a long parley involving public leaders and gaon burahs from both sides of the boundary. Later, the villagers managed to send back the excavators, tractor and dumpers from the site.
However, the contractors returned and dumped sand at the site, taking advantage of the absence of the villagers. Subsequently, the villagers from Arunachal thwarted their attempt to carry out further construction until the matter is resolved.
“Since it is our WRC land, why would we allow Assam to build a road over it without our consent?” said Nichi Ngomle, a former panchayat leader from Hime village.
Ngomle said the Assam-based media have projected the story in negative way and unnecessarily flared up the situation.
“Assam-based media are flaring up the issue by telecasting one-sided and wrong story,” Ngomle said.
Official sources said that after consultation with the district administration of Dhemaji, Assam, both sides have been instructed to maintain the status quo, and the situation is now normal.