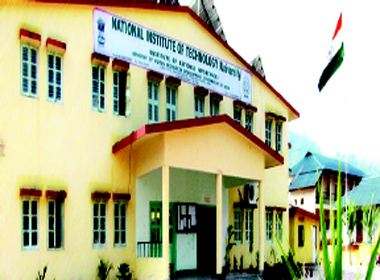 [ Amar Sangno ]
ITANAGAR, Jun 9: In a major blow to the National Institute of Technology (NIT), Yupia, the Board of Governors (BoG) of the NIT has placed a damaging report regarding the issue of security in NIT Arunachal Pradesh.
The highest decision-making body of the NITs reflected the issue of security in its meeting which was held at the AICTE in New Delhi on 13 April.
In fact, the security measures issue was one of those at the top of its agenda.
“It has been observed that the director, the registrar in-charge, the faculty and the staff of NIT AP are receiving threats to their lives from unknown and untraceable people (may be aides of internals). As a result, it is difficult for the institute functionaries to work freely inside and outside the campus, which is a serious security threat issue,” the board observed in its report.
“Besides, some unknown outsiders are entering the campus and trying to physically assault the people or threatening them of dire consequences,” it said.
The situation, the board observed, has resulted in most of the institute’s faculty members – especially those from outside Arunachal – applying for suitable jobs elsewhere.
“In such a scenario, it is difficult, rather impossible for the institute administration to retain the faculty,” the report said. It went on to say that if suitable measures are not taken, NIT AP would be “deserted.”
“Even students residing in the rented hostels are feeling unsafe as unauthorized people enter forcibly in the hostel and try to assault them,” the report added.
The BoG meeting was attended by Prof Anil D Sahasrabudhe, Chairman AICTE and BoG of NIT AP; Prof Rajiv Kumar Garg, Director, NIT AP; DK Singh, Under Secretary (Finance) Department of Higher Education (DHE), MHRD; K Rajan, Under Secretary (Technical Section III) DHE, MHRD; Dr Sagarika Vivek Damle, Associate Professor, Department of Life Science, KC College, Mumbai; Prof S Basu, Dean (Outreach Education Programme), IIT Guwahati; Dr Pinaki Chakraborty, Assistant Professor, NIT AP; and Dr MK Shome, Registrar In-charge-cum-Member, NIT AP.
The three members who could not attend the meeting were Asok Paun, managing director of Marvel Accumax Interior Products Ltd, Jamnagpur; Dr Tejum Padu, Director, Higher & Technical Education, GoAP; and Bora Ete, Chief Engineer (Coordination), PWD, GoAP.
In Arunachal, the BoG’s damaging report has miffed several local faculty members and technical staffers of NIT AP, who said they suspect that the former director of the institute, Prof Rajiv Kumar Garg, was behind the report.
Prof Garg, who had been appointed as the director of NIT AP in December last year, tendered his resignation from the NIT in early May, allegedly after receiving threats. However, he officially denied having received any threat, and cited family issues as the reason for his abrupt resignation. The MHRD did not relieve Prof Garg until his reliever was found.
It developed, however, that Prof Garg officially relinquished his post on Tuesday and left Arunachal. Sources revealed that NIT Silchar (Assam) Director Prof Sivaji Bandyopadhyay has taken charge as the director of NIT AP until a regular director is appointed. Prof Sivaji completed the formalities on Saturday in Guwahati.
“If at all there is a security threat to the faculty and other staff, why did not the director bring it before the BoG in the institute? This report has sent the wrong message about NIT AP,” said a local faculty member of the premier institute, on condition of anonymity.
“The truth is, the director wanted to leave NIT AP. That is why he presented such a damaging report to the BoG” he alleged.
However, highly placed sources in the police department here said no case of threat or intimidation has been reported by the NIT to the police.
“There are many issues that the NIT does not share with the police,” the sources added.
This daily made attempts to contact Prof Garg, but he was unresponsive, refusing to answer a query sent over WhatsApp, although he has seen the message.
Meanwhile, highly placed sources said that the directors of NIT Manipur and NIT Nagaland rejected outright the offer of the additional charge of NIT AP in the wake of the placing of the report on the security issue by the BoG. NIT Meghalaya was not approached in the matter, the sources added.