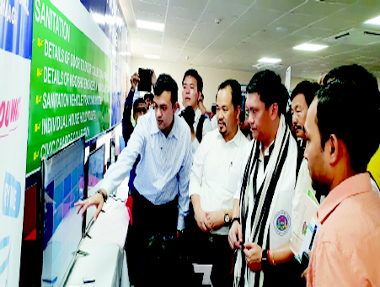 ITANAGAR, Jun 9: The jan sunwai sammelan (JSS) organised by the capital complex district administration to facilitate services to the citizens under the scheme ‘Government at your doorstep (Sarkar aapke dwar)’ saw massive participation by the citizens.
Chief Minister Pema Khandu who inaugurated the event at the Dorjee Khandu Convention Hall here on Saturday visited every department’s counter and interacted with the team members. He enquired about the services provided, and handed out important documents like digitally generated ST, PR and LP certificates to the already approved cases, besides marriage certificates and such to the public.
He felicitated the toppers in the Class 10 and 12 (all streams) exams with certificates and cash awards. He also handed over to the branch manager of Yes Bank the PPA (Payment Payment Advice) for transferring relief amounts to the victims of the damages caused by the recent storms in the capital complex.
At the counter of the food & civil supplies department, the CM handed over PHH ration cards meant for the Puroik community, and new LPG connection certificates and accessories under the Pradhan Mantri Ujjwala Yojana meant for women BPL heads of family.
The JSS is an initiative of the state government, which was passed in the 2018-19 budget, directing every deputy commissioner to conduct such sunwais on the first of every month in their respective districts to resolve public grievances on the spot.
The main objective of the JSS is to deliver government services to the citizens. Saturday’s programme saw large participation by people from all walks of life.
The other services provided during the programme were forms for new electrical and water connections, Aadhaar enrollment, e-ILP, employment certificates, trading licences, renewal of arms licences, distribution of items under the Ujala scheme, new account opening, passport verification, and various schemes such as Old Age Pension, PMMVY, Udyog Aadhaar, memorandum registration, PMEGP, etc.
Citizens were also educated on consumers’ rights and duties, disaster management, sanitation, legal awareness, etc.
The health department registered 377 beneficiaries and provided services like screening for diabetes and hypertension under the NCD, with free checkups for blood sugar, BP, BMI and toxin analysis, malaria blood test, etc.
The department also facilitated immunization, free distribution of ORS, Albendazole tablets, condoms and IEC materials, and awareness on prevention of malaria, etc, and important schemes like Dulari Kanya.
The event also saw active participation by all the major banks, including the SBI, the PNB, Yes Bank and the Apex Bank. The SBI collected 132 government challans worth Rs 2,15,023, and opened 55 bank accounts through the SBI CSP.
The Itanagar Municipal Council also generated revenue of Rs 72,000 by providing trading licences, and Rs 1900 by providing birth certificates.
The Naharlagun power department facilitated 47 post-paid connections and 68 prepaid connections, besides handing new service connection forms for free.
The food & civil supplies department issued a total of 1000 forms for new LPG connections and 1079 forms for fresh/renewal/modification/transfer of ration cards. The APEDA covered a total of 322 beneficiaries, raising an amount of Rs 18,6170.
Over 22 departments offered their services under one roof.
Capital Complex Deputy Commissioner Prince Dhawan informed that the next JSS will be held at Banderdewa in July. He appealed to the citizens to participate in the next JSS and avail facilities through such events which are specifically organized for the public. (DIPRO)